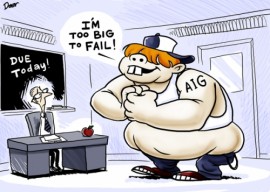 Written by Craig D. Robins, Esq.
Possible New Bankruptcy Chapter for Companies “Too Big To Fail”
We are all familiar with bankruptcy Chapters 7, 11 and 13.  Then there’s Chapter 9 for municipalities, Chapter 12 for farmers, and rather recently, Chapter 15 Bankruptcy  [1] for international insolvency matters.
In an American Bankruptcy Institute Legislative Symposium held today, the panelists discussed whether Congress should add a new chapter to the Bankruptcy Code to handle filings by this country’s largest troubled companies that have recently been in the news as being “too big to fail.”
After the failure of Lehman Brothers and the possible failure of AIG and the big three automakers earlier this year, there has been significant concern about how to handle such large companies.
Daniel Flores, chief Republican counsel for the House Judiciary Committee, suggested that these companies need to be treated specially and that the United States needs to modify its bankruptcy laws so that the largest companies can fail without causing turmoil in this country’s financial system.
Flores advocated for congressional passage of H.R. 3310, which would create a “Chapter 14” to institute a new legal process designed to help restructure troubled non-bank financial holding companies whose collapse would pose a systemic risk to U.S. economic stability. The new chapter would create an oversight board that would bring together the failing company, its creditors and regulators to address complicated financial issues before a bankruptcy filing.
It appears that not all conference presenters were convinced that this new Chapter 14 filing category is  really necessary.
“I don’t know if it’s necessary to have a separate chapter,” said Harvey Miller of Weil Gotshal & Manges, who is the lead bankruptcy attorney for Lehman Brothers. “The Bankruptcy Code now is not perfect, but with some amendments, it could clearly deal with issues of non-bank financial holding companies.”
————————
About the image:  the political cartoon is courtesy of  David Donar, a Clemson University professor who maintains the blog, Political Graffiti [2] .  Although he teaches digital film projection, David has a sharp wit for political satire and uses his political cartoon site to showcase his opinions on all sorts of topics…middle east, US politics, environment, sport, anything news or opinion worthy.  Check it out.
Be Sociable, Share!