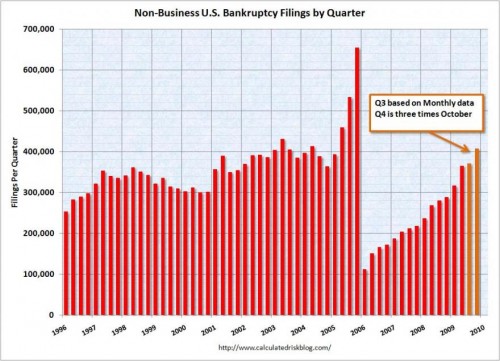 Written by Craig D. Robins, Esq.
Individual Bankruptcy filings have continued to increase this year, bringing the filings for those overwhelmed by consumer debt to new highs since the bankruptcy laws were overhauled in 2005.
Nationally, the 135,913 consumer bankruptcy filings in October represented a 27.9 percent increase over last October’s monthly total of 106,266.
The above graph, courtesy of the Calculated Risk Blog [1], shows consumer filings on a quarterly basis going back to 1996.  We are now approaching the levels seen just prior to when the bankruptcy laws were changed in October 2005.
The filings have increased virtually every single quarter since 2006.  I previously wrote about Bankruptcy Filings Returning to Pre-Amendment Levels [2].
Through October, there have been 1.18 million personal bankruptcy filings in the U.S.
Be Sociable, Share!