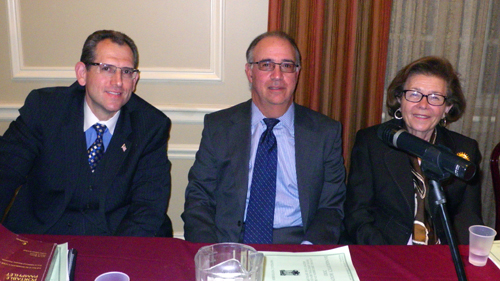 Comment by Bankruptcy Judge Grossman at Annual Update Seminar Hints at How the Central Islip Bankruptcy Court Will Address Future Decisions Involving Means Test Issues
All three Bankruptcy Court judges from the Central Islip Courthouse in the Eastern District of New York attended the Annual Bankruptcy Roundtable panel discussion last night, which was held at the Nassau County Bar Association.
Over one hundred bankruptcy practitioners from Nassau and Suffolk Counties attended the event.
Of course, the presentation included the annual wrap-up of notable Supreme Court bankruptcy decisions and noteworthy local decisions, as well as some nice presentations by some of our local bankruptcy attorneys about substantive law issues.
What I found most significant, however, was not the typical presentation material, but instead, the substance of a two-minute comment that Judge Robert E. Grossman contributed during a review of the Lanning Supreme Court case.
The Comment from Judge Grossman. . .
Judge Grossman, clearly expressing his frustration and dissatisfaction over the poorly-formulated wording in the BAPCPA means test statute, remarked vehemently, “we can’t figure out what this miserably written statute means!”
He then suggested that we seem to be entering a new judicial period in which Bankruptcy Court judges will have more discretion in reviewing means test issues, especially those concerning a debtor’s expenses.
He remarked that we will likely see “less absolutes,” as he predicted that the appellate courts will focus their holdings by utilizing a “plain language” approach.
I found this comment most important as it clearly shows that Judge Grossman, and likely his fellow colleagues on the bench in Central Islip, will be focusing their analysis of means test issues by using a common sense approach as opposed to a strict constructionist approach that can produce a technically-correct, but absurd and unintended result.
Judge’s Comment Underscores Position Judge Will Take with Analyzing Means Test Issues
I have previously written how BAPCPA was designed to essentially remove judicial discretion from interpreting means test results, and I even commented on the “plain meaning” approach that Judge Grossman took in some of his decisions (see my post, Deciphering the Plethora of Means Test Cases Across Many Bankruptcy Courts [2]).
Judge Grossman also referred to his year-old Rabener decision, which I also commented on in my post, Deciphering the Plethora of Means Test Cases Across Many Bankruptcy Courts  [2].  In that decision the Judge made clear that he does not believe that the Court should blindly use a rigid application to reduce judicial discretion when reviewing means test issues.  He stated that a sound conclusion consistent with reason is paramount.
Now, with comments such as those from Judge Grossman yesterday, it is becoming more and more clear that our Bankruptcy Court will be emphasizing a logical, forward-looking, common sense, plain language approach to analyzing and resolving means test issues.
As an active consumer bankruptcy practitioner who needs to know where his clients stand with the means test, and when to butt heads with a Chapter 13 trustee who takes a nonsensical, yet strict constructionist view of the means test law, today’s comment cements what we are already know — that the Court will most certainly be guided by a common sense approach.
What’s even more important is that in utilizing a common sense approach, the bankrutpcy judges will likely use increased amounts of discretion to reach a reasonable and sound result.   So when the Chapter 13 trustee insists that you amend a plan because BAPCPA says so even though it produces a ridiculous result, consider getting an opinion from the judge instead — if the result is reasonable, you now know how the judge will likely rule.
Be Sociable, Share!