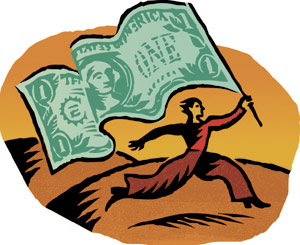 Bankruptcy Revisited — Three Years After the Laws Changed
Written by Craig D. Robins, Esq.
It was just over three years ago when Congress enacted the Bankruptcy Abuse Prevention and Consumer Protection Act, also known as the 2005 Bankruptcy Amendment Act.
Bankruptcy filings surged in September and October 2005 as struggling consumers rushed to beat the law’s implementation. Filings then fell for the next two years.
Filings decreased so much in 2006 that some bankruptcy courts across the country had to lay off staff.  My colleague, Chapter 7 trustee Andrew Thaler, commented at that time that the Central Islip Bankruptcy Court was like a morgue because there was so little activity.
However, that is certainly not the case today.  As I reported last week, filings have again soared, with more than 1 million consumers seeking debt relief through bankruptcy across the country in our struggling economy.  The calendars for hearings held in the Long Island bankruptcy court have very busy so far this year.
With the recession impacting Long Island, continued economic pain will drive consumers from Nassau County and Suffolk County to the Central Islip Bankruptcy Court in large numbers.  Fortunately, my four Long Island bankruptcy law offices are ready to handle them.
Despite the passing of tougher laws in 2005, most individuals still qualify for Chapter 7 relief.  Chapter 7 is the most common type of bankruptcy and it is typically used to wipe out credit card debt.  Those consumers filing Chapter 7 on Long Island make up the largest number of cases filed in the court.
There are also a great number of Chapter 13 cases in the Central Islip bankruptcy court filed by Long Island homeowners seeking to stop foreclosure.
Be Sociable, Share!