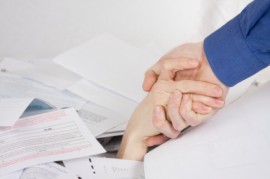 [1]Written by Craig D. Robins, Esq.
Accountants have tax season. Bankruptcy attorneys have bankruptcy season. With Christmas behind us, it is just a question of a few more weeks before bankruptcy season begins.
Bankruptcy attorneys typically see a seasonal trend of creditors seeking redress, pushing individuals and companies over the edge, keeping bankruptcy professionals busy.
Bankruptcy Season for Consumers
After being a Long Island bankruptcy lawyer for 25 years, I’ve observed that the December holidays lead most people who are troubled with serious debt problems to put off getting help. However, the advent of a new year, combined with the added pressure of bills from holiday purchases, causes many consumers with overwhelming debt to make that appointment to see a bankruptcy lawyer.
From a psychological perspective, there are even those in debt who realize that bankruptcy is inevitable, but take a last fling around the holidays, trying to go out in style and deal with the consequences later. Doing so is not consistent with the good faith that is necessary to go into a bankruptcy filing, but, to the dismay of creditors, the small minority of consumers who engage in such frivolity usually get away with it.
Perhaps another reason for bankruptcy season is the concept of getting a new start for the new year, or making resolutions to find out how bankruptcy can eliminate bills and debts. But whatever the reason, my Long Island bankruptcy law practice always starts picking up in mid-January.
Be Sociable, Share!