We are now into the new bankruptcy laws by about one-quarter of a year. The Bankruptcy Abuse Pr 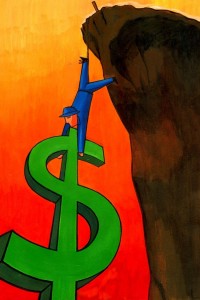 evention and Consumer Protection Act of 2005 (BAPCPA), which went into effect on October 17, 2005, totally changed the bankruptcy procedures that we have gotten used to over the past two decades. Here are some comments, news and updates.

Bankruptcy Filings Set Record. Consumers rushed like crazy to file petitions before the new laws went into effect on October 17, 2005. In 2005, more than 2 million consumer bankruptcy cases were filed nationally before October 17, 2005. After that date a mere 38,000 cases were filed during the rest of calendar 2005. During the past few years, consumers typically filed 6,000 to 7,000 petitions a day across the country. That rate soared to 148,000 filings a day in the final days before the new laws went into effect.

Attorneys and Trustees Are Now Complaining About Business. Many of my colleagues were totally swamped with work just prior to October 17, 2005 in an effort to accommodate their clients seeking to file before the deadline. Immediately thereafter, trustees were swamped with cases to administer. Now, however, there are so few filings that both bankruptcy attorneys and trustees alike are complaining that it is like a morgue out there.

Apparently, almost every possible debtor who needed bankruptcy relief sought it prior to the enactment of the new laws. In addition, it seems that proponents of the new laws have gotten their way in leading the public to believe (incorrectly) that bankruptcy is no longer an option to deal with credit card debts. However, most commentators believe (and practitioners hope) that after this lull, filings will increase. A search of the cases being filed reveals that most of them are Chapter 13 cases that are being filed to stop foreclosure.

Judge Dislikes New Laws. Recently, one bankruptcy judge lambasted the new laws, calling some of the provisions “inane,” “absurd,” and incomprehensible to “any rational human being.” The December, 2005 decision of Judge Frank Monroe sitting in the Texas Bankruptcy Court contained unusually strong language. The decision has been actively discussed on law blogs and circulated around the country.

In that case, which I will discuss in detail in a future column, the debtors sought Chapter 13 relief this past December to stop a foreclosure sale. They were unaware of the new BAPCPA requirement to complete credit counseling prior to filing. Judge Monroe found that the new laws required that he dismiss the case, even though the debtors had obtained the credit counseling just a few days after filing. The decision echoed the judge’s frustration and utter dissatisfaction with the new laws since BAPCPA does little to protect consumers. He noted that “to call the Act a ‘consumer protection’ Act is the grossest of misnomers.”

The judge, in an unpublished decision, determined that the attorney neglected to take reasonable steps to ensure that the debtors followed through with the credit counseling obligation. Consequently, the judge dismissed four of the cases and sanctioned the attorney $1,000 by directing that he pay this sum to the Chapter 13 trustee to compensate the trustee for the trustee’s time. Practice Pointer: make sure your clients obtain credit counseling in a timely fashion.

Credit Counseling Is Not Working. The new law requires every debtor who files for bankruptcy relief to take a credit counseling session prior to filing the petition, no matter what the reason for filing bankruptcy and no matter how low their debts. This requirement was designed to pressure those who could repay their debts to utilize a debt management plan rather than file for bankruptcy. A very recent investigative article in the Washington Post concluded that the BAPCPA credit counseling requirement is not steering debtors away bankruptcy and into payment plans, as envisioned by the Act’s supporters.

According to Money Management International, an approved credit counseling provider, in the first 13 weeks after the new law took effect Oct. 17, only 4.5 percent of the 14,907 debtors counseled by the company had sufficient income to be considered for a plan to pay back debts over a few years. Of those 669 debtors, only 42 have signed up so far for such a debt-management plan. That comes out to a paltry one-third of one percent.

According to the Washington Post, credit counselors are reporting that most of the people who come to them before filing for bankruptcy are in terrible financial shape, “people with true hardship, such as lost jobs or disabilities that cut their incomes.” According to a credit counseling spokesman, “virtually none” qualified to pay anything. Many couldn’t even afford the $20-75 counseling fee.

Filing Fees Increase — Again. Just three months ago the filing fees increased for all Chapter 7 cases filed after October 17, 2005. Chapter 7 fees went from $209 to $274 although Chapter 13 fees went from $194 to $189. However, on February 1, 2006, the House of Representatives passed the Budget Reconciliation Act (S. 1932) by a vote of 216-214, which includes fee increases for various court filings, including bankruptcy filings. The Senate previously approved the measure and it now goes to President Bush for his signature.

The fee increase, which is strictly a revenue-raising measure, was included in a House-Senate conference committee that met in December and rushed out a bill that was vetted by very few people. The increase is effective 60 days after the bill is signed into law.

The bill increases the Chapter 7 filing fee by $25 to $299, and increases the Chapter 13 filing fee by $85 to $274. The apparent purpose of these fee increases is to balance the budget though payments from those who can least afford it. The fees may rise again soon. Chapter 7 trustees have been pressing for an increase in their fees for quite some time, which would undoubtedly raise the chapter 7 filing fee still further, perhaps in just a few more months.

Code Cases and Act Cases. There is now a preferred way to address old cases and new cases. The Bankruptcy Court is calling all cases filed prior to October 17, 2005, “Bankruptcy Code cases.” All cases filed thereafter under the news, often referred to as BAPCPA or the 2005 Bankruptcy Act are being called “Act cases.”

About the Author:  Long Island Bankruptcy Attorney Craig D. Robins, Esq., [1]is a regular columnist for the Suffolk Lawyer [2], the official publication of the Suffolk County Bar Association [3]in New York. This article appeared in the February 2006 issue of the Suffolk Lawyer. Mr. Robins is a bankruptcy lawyer who has represented thousands of consumer and business clients during the past twenty years. He has offices in Medford, Commack, Woodbury and Valley Stream. (516) 496-0800. For information about filing bankruptcy on Long Island [4], please visit his Bankruptcy web site: http://www.BankruptcyCanHelp.com [4]