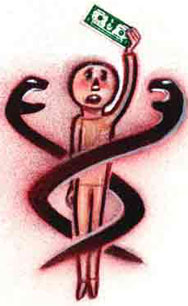 Written by Craig D. Robins, Esq.
This afternoon, the House Judiciary Subcommittee on Commercial and Administrative Law held a hearing examining the role that medical debt plays in consumer bankruptcy.
The hearing, which was titled “Medical Debt – Is Our Healthcare System Bankrupting Americans?,” focused on a recent study I wrote about last week —  Are Americans Being Driven Into Bankruptcy by the Health Crisis? [1]
The chairman, Congressman John Conyers, Jr. (D-MI), in his opening statement, said that he wanted to see, at the very least, revisions to the 2005 Bankruptcy Amendment Act, particularly with respect to debtors dealing with significant medical issues.
He suggested eliminating the credit counseling requirement for such debtors, calling it a waste of time and money.  He also wanted medical debt debtors to be relieved from the onerous means test requirements.
President Obama previously suggested the need to re-write some of the bankruptcy law (see:  Bankruptcy Change Under President-Elect Obama [2]).  Hopefully we will see proposed legislation in the near future.
Be Sociable, Share!