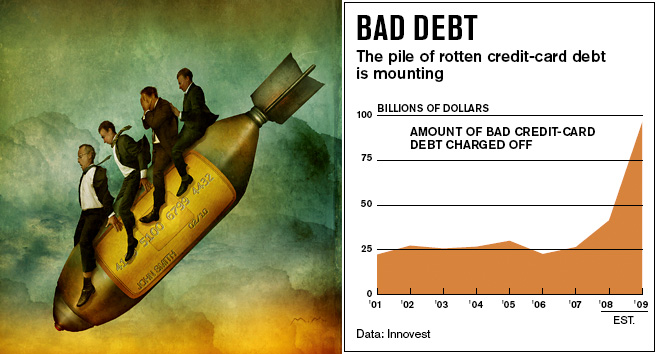 Credit card defaults rose last month to their highest level in at least 20 years according to a report just issued by Reuters. This is just one additional indicator of the deepening recession.

American Express, the largest U.S. charge card company by sales volume, reported that its net charge-off rate rose to 8.70 percent in February from 8.30 percent in January. A “charge-off” means the company has written the debt off as a loss for accounting purposes.

Meanwhile, Citigroup — one of the largest issuers of MasterCard cards — reported that its default rate soared to 9.33 percent in February, from 6.95 percent a month earlier.

Some experts believe that there will be a continued deterioration. Trends in credit cards will get worse before they start getting better. Some analysts estimate credit card charge-offs could climb to between 9 and 10 percent this year from 6 to 7 percent at the end of 2008.

With so many consumers unable to pay their credit card debt, it is no surprise that bankruptcy filings have increased dramatically on Long Island. Bankruptcy permits consumers to discharge and eliminate credit card bills.

Credit card lenders are trying to protect themselves by tightening credit limits, raising standards, and closing accounts. They have also been slashing rewards, raising interest rates and increasing fees to cushion further losses.