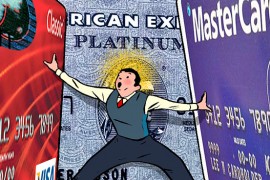 [1]Written by Craig D. Robins, Esq.
How easy is it to get credit after filing for bankruptcy?  This is a question that clients ask me every day.  It’s on almost every client’s mind who is considering filing for bankruptcy.
About three years ago I wrote an article that was published in the Suffolk Lawyer entitled, Life After Bankruptcy: Getting Credit Has Become Too Easy [2].  At the time I discussed how my bankruptcy clients were inundated with credit card offers and solicitations to open new credit card accounts, and that they received a flood of these offers immediately after emerging from bankruptcy.
I haven’t addressed this topic in a while.  Over the past few years, as a result of an economic change to recessionary times, such offers have not flowed as much — but times may be changing.
The Tightening of the Credit Market Has Affected Everyone’s Ability to Get Credit
Just over two years ago when the we saw a mortgage meltdown, and banking institutions started to run into trouble, the credit market tightened.  This had an impact on almost everyone.  Banks became very reluctant to extend credit except to those in the highest echelons of good credit.
As a result, many individuals were no longer able to obtain credit and actually had to file for Chapte 7 bankruptcy as a result.
Up until this tumultuous economic time, credit card companies and banks extended credit cards to everyone like they were going out of style (and in fact, they were, for a period of time).  Lenders flooded the mailboxes of consumers who had filed for Chapter 7 bankruptcy and Chapter 13 bankruptcy, almost immediately after they received their bankruptcy discharges.
I used to regularly hear from my clients that they were amazed to receive offers for new credit cards just weeks after their bankruptcy cases were finished.  However, the tighter credit market changed that for everyone — at least until recently.
Banks Increasing Credit Card Offers Again
According to a recent report by Synovate Inc. [3], a company that provides market data research and monitors credit card solicitations, there was a 29% increase in credit card solicitations over last year’s levels.
Last year apparently produced a recession that was the worst we’ve seen in years, and as a result, credit card issuers pulled back dramatically on offers.  As a result, annual mail volume of credit card offers dropped to its lowest levels since 1993.
Now, however, banking institutions believe the economy is strengthening, and they are renewing their efforts to again flood the mail boxes of consumers with offers of new credit card accounts.
One major bank, HSBC, actually considered leaving the credit card industry entirely last year.  However, just tripled the number of credit card offers that they mail consumers.
Another bank, Capital One, had pulled out of the sub-prime market last year.  However, they recently announced their intention to re-enter it.  They, too, have started flooding mail boxes again.
Reasons Why Banks Are Upping Credit Card Solicitations
— Legislation which placed stricter rules on interest rates and fees took effect in February.  Initially, banks were reluctant to extend additional credit after these new laws went effect.   However, the banks have worked out the kinks.  (You will note that as a result of the credit CARD Act, all Credit card statements now have additional disclosures).
— Banks lost a great deal of money last year.  Now that they have written off substantial losses, their account balances have stabilized, and they are in a better position to extend new credit.
— It appears that the economy is rebounding and consumer spending is increasing again.  With such signs of economic recovery, banks can look forward to better times again and go back to soliciting new customers.
What Else Should Debtors Know About Reestablishing Credit After Bankruptcy?
Most of the matters that I discussed in my older article still apply.  Please see:  Life After Bankruptcy: Getting Credit Has Become Too Easy [2].
Remember:  Nothing is Forever
Although a bankruptcy filing is certainly a negative factor that creditors will consider in deciding whether to extend credit, this fact becomes less and less important over time.
Even though a bankruptcy can remain on one’s credit report for up to 10 years, its effect diminishes on a regular basis each month that goes by after the bankruptcy cases is closed.
Get a Secured Credit Card
It’s a generally accepted fact that a consumer needs two types of credit to quickly rebuild a credit score.  One is installment credit, which includes auto loans or leases, student loans, and mortgages.
The other is revolving credit, which includes credit cards and home equity lines of credit.
Since someone emerging from a recent bankruptcy may have a tougher time qualifying for a regular credit card, the best solution may be to obtain a “secured” credit card, which is one in which you place a deposit with the bank, and then get a line of credit for that amount, typically about $500.
Get a Book on Rebuilding Credit
Any big box book store like Borders or Barnes and Noble will have a whole shelf of books on how to rebuild credit.  Go there, take your time looking at the books, and then buy the one that looks best.
For about ten to fifteen bucks, it will be a great investment.  You can also look at Amazon.com.  In a future blog post, I will review some of the credit repair books.
Be Sociable, Share!