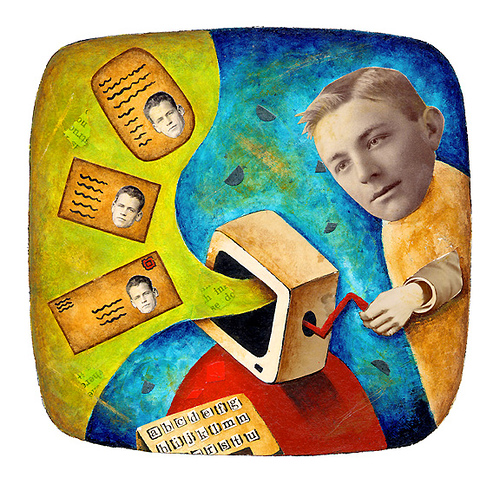 In my never-ending quest to stay current with consumer bankruptcy case law, I regularly read several bankruptcy law digests and periodicals. Every now and then I come across an intriguing written decision based on an interesting factual scenario, which also provides an enlightening discussion of a particular area of the law that may be important to know.

I recently found such a case that initially caught my attention because it concerned a consumer bankruptcy attorney who prevailed against “one of the bad guys” – a credit card company that violated the automatic bankruptcy stay. This is an area of the law that I have always been fascinated with. (Last month I detailed one of my own cases in which I successfully litigated against a mortgagee for bringing frivolous litigation and obtained a record amount of sanctions for my client.)

Creditor Violates Stay in Harvey Case. Robert and Lori Harvey were typical consumer debtors in Maine. Their attorney filed a routine Chapter 7 petition for them in April 2007 in the Bankruptcy Court for the District of Maine. The attorney listed a typical unsecured credit card debt owed to United Technologies.

He scheduled this creditor with the payment address the credit card company consistently uses for customers’ credit card payment remittances, even though the bills contained the standard statement, “Do not include any additional correspondence with your bill. Any correspondence returned with your bill will be discarded.” This is a statement we have all seen countless times.

A week after the petition was filed, United Technologies sent another bill to the debtors, leading Harvey’s counsel to write to them (at the same address), warning them that the billing violated the automatic stay.

Creditor Argues That It Did Not Get Proper Notice. United Technologies argued that under the 2005 Bankruptcy Amendment Act (BAPCPA), which enlarged the requirements for providing proper notice to creditors, the debtors failed to give sufficient notice of the bankruptcy filing.

United Technologies also argued that the debtors’ attorney’s subsequent correspondence, which he sent to a payment remittence address, was also ineffective, and, at a minimum, precluded the court from assessing damages on account of any stay violation.

The Court Details New Code Section 342 Which Addresses Notifying Creditors. The recent-vintage legislation under BAPCPA contains amendments to Bankruptcy Code section 342, which provides that notice of the bankruptcy filing, in order to be proper, cannot be sent to the wrong address. If it is, the creditor cannot be subjected to monetary sanctions for violation of the stay. In addition, section 342(c)(1) provides that any notice required to be given to a creditor must include the last four digits of the debtor’s Social Security number.

In addition, section 342(c)(2)(A) provides that if the creditor provides the debtor with at least two communications containing an “address at which such creditor requests to receive correspondence,” then any notice that the debtor sends to the creditor shall be sent to that address. Court also discussed other aspects of the noticing provisions in this section.

The pre-BAPCPA law, which still remains as section 342(a), sets the standard for providing notice. It is a general standard: “such notice as appropriate.”

Court Holds that Notice Sent to Payment Remittance Address is OK. The court held that United Technologies received proper notice. The court noted that the debtors scheduled an “active address” for United Technologies, and that the clerk sent notice of the bankruptcy filing there, and Harvey’s attorney sent correspondence there containing notice of the consequences for violating the stay.

The judge concluded that “section 342 requires no more,” except that section 342(a) dictates that notice of the order for relief must be “appropriate.”

Although Universal Technologies argued that it had warned its customers that correspondence sent to the remittence address would be discarded, the court did not find this persuasive. “Scheduling an address at which a creditor conducts its activities, and directing bankruptcy-related communications there would seem eminently reasonable and appropriate.”

The judge further pointed out that the creditor did not deny that it had received the notices and correspondence informing it of Harvey’s bankruptcy before dunning him.

Creditor Violates Stay Because It Acted Like Infantile Child. The Court analogized the creditor’s conduct with that of an infantile child. “I would not concede that a child who thrust his fingers in his ears and hummed loudly while being admonished had not received the admonition. Neither would I concede that Universal Technologies’ contention, that it received no notice because it threw it away. Where a litigant’s own internal procedures are the cause of a failure to comply with proper legal procedures, courts generally refuse to grant relief from the consequences of the lack of compliance.”

Thus, the court determined that United Technologies did receive proper notice of the bankruptcy filing and its subsequent dunning letters constituted a violation of the stay.

Practical Tips. Although this case comes from a non-appellate court in another jurisdiction, it appears to be the only case to have addressed this issue, and its reasoning seems to be logical and based on common sense: creditors must read the mail that they receive.

I suggest that you provide the best notice possible to a creditor, which is the “correspondence address.” However, sometimes this address is just not available. Based on the Harvey case, we can now have some peace of mind that utilizing other addresses used by the creditor will probably be sufficient.

About the Author.  Long Island Bankruptcy Attorney Craig D. Robins, Esq., [1]is a regular columnist for the Suffolk Lawyer [2], the official publication of the Suffolk County Bar Association [3]in New York. This article appeared in the November 2008 issue of the Suffolk Lawyer. Mr. Robins is a bankruptcy lawyer who has represented thousands of consumer and business clients during the past twenty years. He has offices in Medford, Commack, Woodbury and Valley Stream. (516) 496-0800. For information about filing bankruptcy on Long Island [4], please visit his Bankruptcy web site: http://www.BankruptcyCanHelp.com [4].