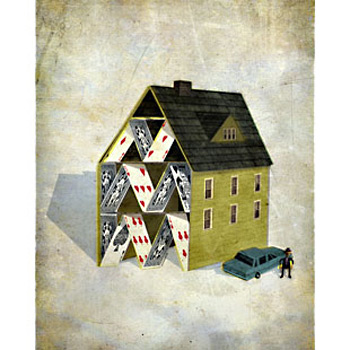 Written by Craig D. Robins, Esq.
The SEC said that American Home Mortgage executives knew the company was collapsing like a house of cards and kept that secret
In a post from 2007, I discussed the sub-prime mortgage crisis and the toppling of the sub-prime mortgage industry.
In that post, I wrote that American Home Loan, one of the nation’s largest mortgage lenders at that time, which was then headquartered here in Melville, had utterly collapsed. (https://longislandbankruptcyblog.com/the-sub-prime-mortgage-meltdown/ [1])
Today, the Securities and Exchange Commission announced that Michael Strauss, the former chief executive of American Home Mortgage Investment Corp., agreed to pay more than $2.45 million to settle fraud charges.
The SEC alleged that Strauss, as well as former CFO Stephen Hozie, engaged in accounting fraud and made false and misleading disclosures to conceal the mortgage lender’s worsening financial condition in early 2007 as the sub-prime crisis emerged.
“These senior executives did not just occupy a front-row seat to the mortgage meltdown – they were part of the show,” said Robert Khuzami, director of the SEC’s division of enforcement in a press release issued by the SEC. “As the housing market imploded, these executives kept secret that the company’s holdings were collapsing like a house of cards.”
Be Sociable, Share!