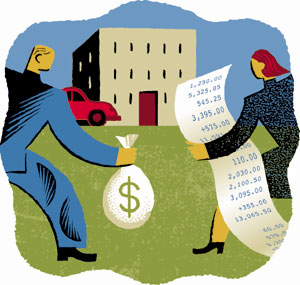 Written by Craig D. Robins, Esq.
.
…
.
Bankruptcy case filed in Central Islip Bankruptcy Court today will test the use of a large “marital adjustment” on the means test for high-income debtors
.’
.
From time to time I review the bankruptcy filings of other attorneys to get an idea of what kinds of cases are being filed and to also see what other attorneys are up to.
One case that was filed today really stood out because the means test indicated an annualized family income of $197,377 per year.
Now I’ve filed a number of cases where the family income was between $100,00 per year and $150,000 per year.  However, I have never came across a Chapter 7 Long Island bankruptcy case where the family income was touching $200,000.
Many Long Island consumers have rather high incomes and still qualify for Chapter 7 under the new bankruptcy laws which impose a strict means test requirement.  See my previous post: If I Make Over $100,000 a Year, Can I Eliminate Credit Cards Debts in Bankruptcy? [1]
This case, in which only one spouse filed for Chapter 7 Bankruptcy, has a very high “marital adjustment” on the means test
Other interesting facts about this case are that the family size is relatively small – only three people, and the monthly mortgage payment is only $3,599.  What enabled this debtor to pass the means test is that only the wife filed for bankruptcy (her husband did not), and she claimed a “marital adjustment” for her non-filing spouse of $5,517.
It was also interesting that the debtor did not explain how the marital adjustment was being used.
Generally, a debtor’s non-filing spouse’s income must be included in the means test.  However, the Bankruptcy Code says that the debtor need only include this income to the extent to which it is contributed “on a regular basis for the household expenses of the debtor or the debtor’s dependents.”
Accordingly, for means test purposes, a debtor can deduct from the non-filing spouse’s income that sum which the non-filing spouse uses for herself or himself, and does not contribute to the family’s expenses.  This is called the “marital adjustment.”
The extent of how much a debtor can deduct for the “marital adjustment” on the means test will be tested
However, one of the unsettled areas of law concerns what deductions are reasonable.  In this case that was filed today, the Office of the United States Trustee will certainly review the means test and the relatively-large marital adjustment with a fine-tooth comb and possibly raise objections.
My colleague, Long Island bankruptcy lawyer Joseph S. Maniscalco, Esq., of Wantagh, is representing the debtor, and my colleague, Richard L. Stern, Esq., is the Chapter 7 trustee.  Dorothy T. Eisenberg is the bankruptcy judge assigned to the case.
I will follow up on this case and keep you posted in a future blog post.
Be Sociable, Share!