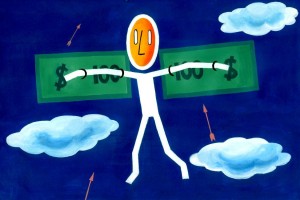 I was prompted to write this article by the unusually large number of calls that I received last month from old bankruptcy clients and their tax preparers. For some reason, many tax preparers, not knowing how to treat bankruptcy for tax purposes, mistakenly believe that a taxpayer’s bankruptcy must either be reported on a tax return, or there would be tax consequences involving the concept of “debt forgiveness.”

Understanding the concept of debt forgiveness is important as that may trigger tax consequences. However, bankruptcy does not.

There May Be Tax Consequences for Forgiveness of Debt. I frequently represent clients with negotiating settlements of credit card debt as an alternative to filing for bankruptcy. Let’s suppose that I negotiate a settlement on behalf of a client in which I reduce a $10,000 MasterCard bill to $5,000. The Internal Revenue Service views the $5,000 savings as “discharge of indebtedness” or “debt forgiveness” and consequently treats this savings as earned and taxable income to the client. The basic premise here is that any debt that is forgiven is counted as income and the IRS requires the taxpayer to pay taxes on the amount that is forgiven. This requirement is set forth in Internal Revenue Code section 108. Sometimes debt forgiveness income is referred to as “imputed income.”

The IRS Form 1099-C. The tax laws require creditors to issue their customers a form 1099-C when a debt is forgiven or settled for less than full value. The creditor must also file a copy of the form with the IRS.

There are Several Exceptions to Treating Debt Forgiveness as Income. IRC section 108 provides two pertinent exceptions. They include discharging the debt in bankruptcy and being financially insolvent just before the time of forgiveness. Insolvency simply means that the value of the taxpayer’s debts exceeded the value of the taxpayer’s assets immediately before the forgiveness of debt. The IRS has form 982, entitled “Reduction of Tax Attributes Due to Discharge of Debt,” that can be filed with a return to indicate the exception.

There are No Tax Consequences From Discharging Debts in Bankruptcy. When the forgiveness of debt occurs in a bankruptcy case, Internal Revenue Code section 108(a)(1)(A) specifically provides that it is not to be treated as income. Thus, discharge of a debt through a bankruptcy proceeding is excluded from gross income for tax purposes.

Creditors Sometimes Cause Problems by Issuing Form 1099-C. Even though the law is clear that discharged debts are not to be treated as taxable income, some creditors erroneously believe that they are required to send a bankruptcy debtor a form 1099-C when a debt is discharged in bankruptcy. Obviously this causes confusion to tax preparers who are often accustomed to including all income reflected in 1099 forms as income to the taxpayer.

What Should a Debtor do If Creditor Issues a 1099-C after Bankruptcy? If a credit card company issues a debtor an IRS form 1099-C after a debtor has received a bankruptcy discharge, the debtor has two options. The first would be to contact the creditor to advise them that the 1099-C was issued in error. However, since such creditors have no incentive to actively resolve this, the better option would be for the debtor to directly advise the IRS about the filing of the bankruptcy. The debtor can do this by writing a simple letter to the IRS supported by a photocopy of the bankruptcy discharge order and the schedule containing the specific debt. Alternatively, the debtor or his accountant can file an IRS form 982, which enables the debtor to point out to the IRS that the debt forgiveness (by virtue of the bankruptcy discharge) occurred in a bankruptcy proceeding and has no tax consequences. It is very easy now to go on line and obtain a PDF copy of IRS form 982 (or any other tax form).

Advise Your Clients That There Are No Adverse Tax Consequences. I will now be advising my debtor clients, in my closing letter to them, that discharging debts in bankruptcy is not a taxable event. So should you.

Remember: Tax Refunds Must be Scheduled. Around this time of year, many debtors will have filed their tax returns just a few weeks ago and will be expecting tax refunds. Remember that the right to receive a tax refund is an asset that must be scheduled as personal property. Since each debtor can only exempt a total of $2,500 of liquid assets, which most commonly includes cash, money in bank accounts and entitlement to tax refunds, it might be necessary to delay the filing until after the debtor receives the refund, if the expected refund is substantial.

About the Author.   Long Island Bankruptcy Attorney Craig D. Robins, Esq., [1]is a regular columnist for the Suffolk Lawyer [2], the official publication of the Suffolk County Bar Association [3]in New York. This article appear in the May 2007 of the Suffolk Lawyer. Mr. Robins is a bankruptcy lawyer who has represented thousands of consumer and business clients during the past twenty years. He has offices in Medford, Commack, Woodbury and Valley Stream. (516) 496-0800. For information about filing bankruptcy on Long Island [4], please visit his Bankruptcy web site: http://www.BankruptcyCanHelp.com [4].