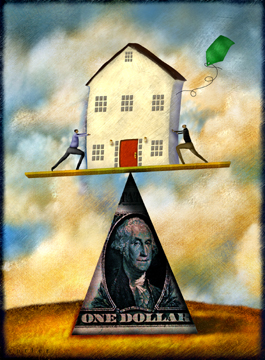 This afternoon, the House of Representatives approved legislation that should enable over a million Americans to reduce their mortgage payments through bankruptcy.

This is part of the Democratic efforts to stem a U.S. housing crisis that has erased more than $2.4 trillion in home values.

How Bankruptcy Judges Will Be Able to Modify Mortgages

Senate Must Still Vote on the Bill

In order for the bill to become law, it must still be approved by the U.S. Senate, who can vote on a companion bill as early as next week. President Obama would then sign the bill into law shortly thereafter.

The bankruptcy provision is opposed by the banking industry and most Republicans, who said it would further destabilize home prices. President Barack Obama and a majority of Democrats backed using bankruptcy as a last resort for homeowners facing default or foreclosure in the worst housing crisis since the Great Depression.

This legislation will certainly encourage many more Chapter 13 bankruptcy filings on Long Island.

As a Chapter 13 Long Island bankruptcy attorney, I have many homeowners who will certainly benefit from the measure. The new law should have the effect of enabling many Long Islanders to stop foreclosure by seeking a mortgage modification through bankruptcy.

The Approved Bill Contains a Compromise

In my blog post a week ago today (Today’s a Big Day For Homeowners Seeking Debt Relief in Bankruptcy [1]), I wrote that this measure was up for vote. However, Democratic leaders pulled the measure from consideration last week amid opposition from industry organizations including the American Bankers Association.

Stricter provisions were added at the urging of a group of self-described moderate lawmakers called the New Democrat Coalition, including a requirement that borrowers seek loan modifications from their mortgage companies before they could qualify to amend repayment terms through bankruptcy.

The bill that was approved today reflects a compromise from earlier proposed legislation. Under the approved bill, bankruptcy judges would have the discretion to decide whether banks had offered a “qualified” loan modification that would bar borrowers from cramming down their mortgage in bankruptcy.

A qualified modification must meet standards set out by Obama yesterday as part of his housing rescue plan. It calls for lenders to cut a borrower’s monthly payment to as little as 31 percent of gross income by first reducing the interest rate on the mortgage, then lengthening repayment terms and reducing the outstanding loan balance if necessary.

Borrowers taking advantage of provisions in the legislation would have to reimburse mortgage companies for a portion of losses if the property is sold before the debtor completes a five-year Chapter 13 bankruptcy repayment plan. Chapter 13 of the bankruptcy code allows individuals with regular income to pay all or part of their debts without losing their homes to foreclosure.

For years, the Law Offices of Craig D. Robins, Esq. has provided Long Island Chapter 13 legal representation. Long Island homeowners seeking assistance to stop foreclosure are invited to contact us for an appointment