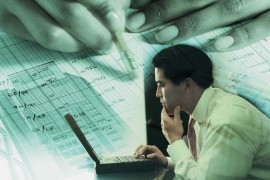 In my regular monthly column in the Suffolk Lawyer [2] last month I discussed the difficulties that Congress created by enacting a means test statute that is poorly worded and confusing.  (Deciphering the Plethora of Means Test Cases Across Many Bankruptcy Courts [3]).
In this month’s column I will highlight some recent bankruptcy court decisions that shed light on interpreting what is “income” for means test purposes when a debtor receives bonuses, teachers’ salaries or unemployment insurance benefits.
Countering the Lopsided Results of the Means Test
The purpose of the means test is to create a projection of the debtor’s net income and expenses for a period of three to five years after the filing date to see if the debtor would have sufficient surplus funds to make some kind of payment to creditors.  In doing so, the starting point is to ascertain what the debtor’s income was during the six-full-month pre-petition calendar period.
When you only look at a six-month period to project the next three to five years of income, you often get a lopsided result.  For example, if the debtor received a bonus in the prior half-year, his means test would effectively double this income because the means test would assume that the bonus would be paid every six months.
Conversely, if the debtor waited more than six months after receiving the bonus, the debtor would not even have to count the bonus as income.
Because of this uneven result, bankruptcy attorneys would often have to engage in a strategy of timing the filing.  However, it seems that some bankruptcy courts are becoming more logical in their approach to analyzing the statute to provide a more balanced result for all parties.
Annual Bonuses Shall be Pro-rated Over 12 Months for the Bankruptcy Means Test
A recent case from Virginia looked at a debtor who received an annual bonus in the six-month pre-petition means test period.  The court held that the bonus should be pro-rated over a 12-month period to determine the amount necessary to calculate the debtor’s “current monthly income.”  In re Meade, —— B.R. ——, 2009 WL 4456211 (Bankr. W.D. Va., Nov. 13, 2009).
The court concluded that the language “average monthly income,” which is found in Bankruptcy Code section 101(10A)(A) is susceptible to two interpretations.  One of them is the mechanical example I gave above, which can result in either a harsh result to the debtor or a windfall.
However, the court adopted a different, more realistic “common sense” interpretation, which the court said was more in keeping with what appeared to be the overarching purpose of the Bankruptcy Abuse Prevention and Consumer Protection Act of 2005, namely, to require debtors to make meaningful payments to their creditors if they have the funds to do so.
The court felt that Congress intended for there to be some connection between the compensation received and the period of time in which the applicable services for such compensation were rendered.

With regard to the concept that under any different interpretation, debtors’ attorneys would want to time the filing of their clients’ cases, the judge said, “It is difficult to believe that Congress intended such a result or desired to encourage such tactics.”

A Teacher’s Income Is Not Pro-rated for the Bankruptcy Means Test
The Meade case also addressed the wife’s income, who, as a public school teacher, received her annual salary over a ten-month period.
Here the court took a totally different approach by refusing to pro-rate the wife’s  income.  The court said that this situation was well within the framework provided by Congress of looking to the income actually received during the six month period prior to bankruptcy as the best measure of a debtor’s ability to pay creditors.
Unemployment Benefits Are Income for the Bankruptcy Means Test
The means test enables a debtor to exclude from income unemployment benefits that are received under the Social Security Act.  A recent Illinois case held that unemployment benefits should not be included in this exception to income, and should thus be treated as income for the means test.  In re Kucharz, 418 B.R. 635 (Bankr. C.D. Ill., Oct. 28, 2009).
To complicate matters, the court, after provided a highly detailed history of unemployment benefits in this country, cited two cases from 2007 that held to the contrary.
However, the court concluded that unemployment benefits are designed to replace wages, and since wages must be reported on the means test, then so to must unemployment benefits be reported.  The court also highlighted the aim of the means test, which is to include income from all possible sources.
About the Author.  Long Island Bankruptcy Attorney Craig D. Robins, Esq., [4]is a regular columnist for the Suffolk Lawyer [5], the official publication of the Suffolk County Bar Association [6]in New York. This article appeared in the MARCH 2010 issue of the Suffolk Lawyer. Mr. Robins is a bankruptcy lawyer who has represented thousands of consumer and business clients during the past twenty years. He has offices in Patchogue, Commack, West Babylon, Coram, Woodbury and Valley Stream. (516) 496-0800. For information about filing bankruptcy on Long Island [7], please visit his Bankruptcy web site: http://www.BankruptcyCanHelp.com [7].
Be Sociable, Share!