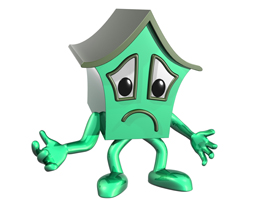 [1]Written by Craig D. Robins, Esq.
One of the most frustrating aspects of trying to seek a modification is dealing with the mortgagee.  They will often ask for documents and then lose them numerous times.  The representatives are less then helpful.  The lender usually drags the process on.  They don’t always act in good faith.
Today, a story in Newsday about the difficulties one family was encountering in their quest for a mortgage modification highlighted another reason why it can sometimes be frustratingly difficult to obtain a mortgage modification — sheer incompetence of employees at the mortgagee.  In this case, the employee didn’t know the difference between two simple legal terms.
Newsday dedicated a full page to report on the plight of the Caceres family of Huntington Station.  Mr. Geremias Caceres had been killed two years ago in a botched robbery attempt.  Without his income, the family had great difficulty making the monthly mortgage payments, and to make matters worse, the value of their house dropped to $180,000 while they still owed $350,000 on the mortgage.
The surviving widow, Blanca Caceres, just spent 20 agonizing months trying to negotiate a mortgage modification with their lender, IndyMac Mortgage Services, whose corporate parent is OneWest Bank, only to be turned down.
Why did IndyMac turn them down?  Because the widow couldn’t  demonstrate that she was the “executor” of her late husband’s estate.  However, she was the “administrator,” which for all practical purposes in the State of New York, is the exact same thing.
When someone dies, and it is necessary to probate or handle the legal affairs of an estate, a court-appointed estate representative is necessary.  That legal representative is usually the surviving spouse, and Mrs. Caceres did indeed apply to the Surrogate’s Court who duly qualified her as the estate representative, a fact that she demonstrated to IndyMac.
If a decedent had a will, the legal representative is called an executor.  If there was no will, the legal representative is called an administrator.  Whether you are one or the other, it really makes no difference in handling the administration of an estate.  It’s just a question of semantics and terminology
as to what you are called.
However, the inept employee at IndyMac who reviewed this loan mod file, did not know the difference between the two, and even though the employee knew that Mrs. Caceres was the administrator, the employee got hung up on the word, “executor.”
It appears that the Caceres family does not have an attorney who is assisting them, so Newsday stepped in, contacted IndyMac Bank, and persuaded them to re-open their file.
I should also note that I wrote a number of posts in 2009 about how Suffolk County Supreme Court Justice Jeffrey Arlen Spinner lambasted IndyMac Bank for behavior the judge called “harsh, repugnant, shocking and repulsive.”  See Judge Cancels Mortgage Due to Mortgagee’s Shocking Behavior in Long Island Foreclosure Action [2].  It seems that now, several years later, IndyMac Bank still has not yet gotten their act together.
Incidentally, Newsday also quoted me in a story about that 2009 IndyMac case:  Long Island Bankruptcy Attorney Craig Robins Quoted In Newsday Article About Canceled Mortgage [3].
Be Sociable, Share!