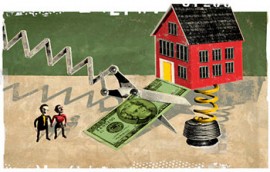 One Long Island Bankruptcy Judge Permits Cram-Down; Two Do Not

That decision was very newsworthy, as it permitted homeowners whose homes were underwater to “strip-off” and remove a wholly-unsecured second mortgage.
However, we have since heard from our two other Long Island Bankruptcy Court judges.
Judge Eisenberg Permits Chapter 7 Cram-down
The decision granting this relief was In re Lavelle, No. 09-72389-478, 2009 WL 4043089 (E.D.N.Y. November 25, 2009).  In that case, Judge Eisenberg determined that a Chapter 7 debtor may avoid a subordinate mortgage lien if that lien is wholly unsecured, based on an analysis of Bankruptcy Code section 506.
Judge Eisenberg, in her decision, also commented on the seminal Supreme Court case of  Dewsnup v. Timm, 502 U.S. 410 (1992), stating that she found no authority in it that prevents a Chapter 7 debtor from cramming down a second mortgage in a Chapter 7 case.
The Distinction Between ‘Strip-Down” and “Strip-Off”
Judge Eisenberg focused a large part of her decision on Dewsnup which held that a Chapter 7 debtor may not “strip down” a first mortgage to the fair market value of the property.   However, she pointed out that there is a difference between “stripping down” a mortgage and “stripping off” a mortgage.
Stripping-down refers to removing that portion of a mortgage that is unsecured, which is done pursuant to § 506.   On the other hand, “stripping off” is essentially cramming down a mortgage, which means removing its lien status altogether.  She determined that stripping-off was permissible in Chapter 7 cases.
Our Two Other Bankruptcy Judges Have Since Held Differently
Once Judge Eisenberg released the Lavelle decision, the Long Island bankruptcy bar was abuzz about the possibility of being able to cram-down undersecured second mortgages for their Chapter 7 debtor clients.  However, there was no guarantee that our other two bankruptcy judges would follow Lavelle.  Now we know that they will not.
Judge Grossman Denies Cram-down
Just last month, Judge Robert E. Grossman issued a decision in a case involving a somewhat similar set of facts and denied the debtor’s application to cram-down and strip-off the second mortgage – even though the mortgage lender defaulted and failed to file any response whatsoever.  In re Pomilio, —B.R.—, No. 09-72389-reg, 2010 WL 681300 (E.D.N.Y. February 23, 2010).
Judge Grossman discussed Judge Eisenberg’s Lavelle decision, stating that she set forth a “well reasoned argument which finds support in a number of scholarly articles.” However, he felt constrained to apply her argument to the facts of his case.
In Pomilio, Judge Grossman began his analysis with Bankruptcy Code Sections 506(a) and (d), and the Supreme Court’s holding in Dewsnup, that a Chapter 7 debtor cannot bifurcate a secured creditor’s claim into a secured claim to the extent of the fair market value of the subject real property, and an unsecured claim for the remaining balance
He reached a different conclusion than Judge Eisenberg, determining that the  “stripping down” process was simply not available to a Chapter 7 debtor.
Judge Trust Adopts Judge Grossman’s Position Denying Cram-down
Last week, Judge Alan S. Trust issued the Caliguri decision in which he expressed his position against Chapter 7 cram-downs.  In re Caliguri, No. 09-75657-ast, slip op. (E.D.N.Y. March 16, 2010).  In that decision, Judge Trust referred to both the Lavelle and Pomilio decisions and stated, “This Court adopts the analysis in Pomilio and concludes that a Chapter 7 debtor may not avoid the lien of a wholly undersecured, consensual mortgage lien holder.”
Judge Trust pointed out that post-Dewsnup courts have generally interpreted Dewsnup to prohibit Chapter 7 debtors from avoiding (stripping off) liens which are wholly undersecured for the same reasons that a Chapter 7 debtor may not reduce a secured mortgage claim to the fair market value of the property.
He further pointed out that such a reading of Dewsnup is a proper and consistent application of Section 506.

Practical Tips
A debtor has a one in three chance of having his or her case land in Judge Eisenberg’s Court, in which event, the debtor will likely be able to successfully bring a Chapter 7 cram-down proceeding.  If the case is pending before Judges Trust or Grossman, their position is clear that the debtor cannot.
However, at some point down the road, there will certainly be a higher court decision establishing the issue for sure, at which point all of our judges will be obligated to follow it.
Get Copies of Bankruptcy Decisions Reported in this Article
Check back to view this post in a few days and I will have copies of the Long Island Bankruptcy Court decisions that I cited in this post.
About the Author.  Long Island Bankruptcy Attorney Craig D. Robins, Esq., [4]is a regular columnist for the Suffolk Lawyer [5], the official publication of the Suffolk County Bar Association [6]in New York. This article appeared in the APRIL 2010 issue of the Suffolk Lawyer. Mr. Robins is a bankruptcy lawyer who has represented thousands of consumer and business clients during the past twenty years. He has offices in Patchogue, Commack, West Babylon, Coram, Woodbury and Valley Stream. (516) 496-0800. For information about filing bankruptcy on Long Island [7], please visit his Bankruptcy web site: http://www.BankruptcyCanHelp.com [7].
Be Sociable, Share!