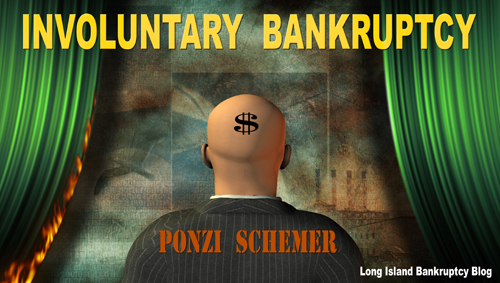 [1]
Written by Craig D. Robins, Esq.
Firm of Lawyer Who Jumped Eight Floors to his Death Now in Involuntary Chapter 7 Bankruptcy in Central Islip Bankruptcy Court
The Long Island law firm of Korn & Spirn has had more than its share of woes this year.  In March, partner Jay Korn of Rockville Centre committed suicide at the age of 70 by jumping to his death.  He shared aHempstead law practice with Arthur Spirn for more than 30 years in a firm known as Korn & Spirn.
He jumped off the roof of the Hempstead office building where he maintained his law practice, landing on an awning eight stories below. That Wednesday morning in March he died about half an hour later.
The big news after the suicide was that it appeared that Korn defrauded dozens of clients out of millions of dollars in a Ponzi scheme.  Nassau County District Attorney Kathleen Rice began investigating him the day after he killed himself.
A large number of clients immediately filed complaints thereafter.  Garden City attorney Jerome Resiman, who is representing a number of the alleged victims, called Korn “a mini-Madoff,” according to news reports, and said that Korn promised 15% annual returns on investments.
As of April, there were close to a hundred complaints from victims alleging that Korn defrauded them out of about $30 million.  In news reports from that time, The District Attorney’s office commented that neither the firm nor Korn’s partner, Arthur Sprin, were under investigation.
Law Firm of Dead Attorney Investigated for Ponzi Scheme Must Now Answer to Creditors in Bankruptcy Court
Yesterday, three creditors who asserted that they had claims against the law firm partnership filed an involuntary Chapter 7 Bankruptcy Petition against the firm.  The case is now pending before Central Islip Bankruptcy Judge Dorothy Eisenberg under Case No. 10-79012
The petitioning creditors are Steve Prince of New York, represented by Thomas J. Perkins, Esq., who claimed he was owed $600,000; Lewis J. Rubin of New York, represented by Herbert Kramer, Esq. of New York, who claimed he was owed $2,565,000; and Ahron Glambosky of East Meadow, represented by David Grill, Esq. of New York, who claimed he was owed $1,250,000.  That’s a total of $4.4 million in claims for three creditors.
The Creditors Appear to be Victims of the Ponzi Scheme
It appears that these creditors were victims of the Ponzi scheme as they indicated that the nature of their claims were funds entrusted for investments and real estate purchases.  It was unclear, however, whether they were alleging that the firm had any involvement in Korn’s alleged Ponzi activities other than financial liability.
The creditors served the involuntary petition papers upon Arthur L. Spirn, P.C., the new law firm of the surviving partner, who moved his office to Garden City after the suicide.
The actual involuntary bankruptcy petition was rather short, consisting of only two pages and no schedules.
What is Involuntary Bankruptcy?
When creditors feel that their funds may have been diverted or embezzled, they have several options.  They can litigate in state court or they can force the debtor into bankruptcy, which can often enable the litigation to proceed at a faster pace before a trustee who has considerable legal authority.
One of the powerful remedies a trustee in a bankruptcy case has is the ability to recover payments or wrongful transfers that the debtor made.
Once the court appoints a trustee, the trustee has the right to thoroughly examine the debtor and hold the debtor accountable.  However, the trustee can also pursue other parties as well if the debtor transferred funds or valuable assets to those parties without receiving reasonable value in return..
In order to force a debtor into an involuntary bankruptcy, there must be at least three petitioning creditors who are owed at least $10,000 combined.  The petitioning creditors must also be able to allege that there are no fewer than 12 creditors overall.  In addition, the claims cannot be subject to a bona-fide dispute.
After the petitioning creditors file the involuntary bankruptcy petition, the Bankruptcy Court issues a summons that the debtor has 20 days to respond to.  In the Korn & Spirn case, Judge Eisenberg issued the summons today.
Involuntary Bankruptcy Cases Involving Ponzi Schemes Seem to Be Getting More Widespread
The victims of Ponzi schemes often use involuntary bankruptcy proceedings to protect their rights.  This is the case with Agape World and Bernie Madoff.
Earlier this week I attended the 2010 Bankruptcy Roundtable at the Nassau County Bar Association.  One of the interesting presentations that night was given by David Mahoney, Esq. about issues that arise in bankruptcy proceedings involving debtors who had engaged in illegal Ponzi Schemes.
David is an associate in SilvermanAcompora, the firm of Chapter 7 Trustee Ken Silverman who is presiding over the bankruptcy case of Agape World.  I wrote about that case previously — Ken Silverman Appointed Chapter 7 Trustee in Agape World Case [2].
Judge Eisenberg is also the judge in the Agape World case.  She will certainly become a judicial expert in Ponzi schemes.
Be Sociable, Share!