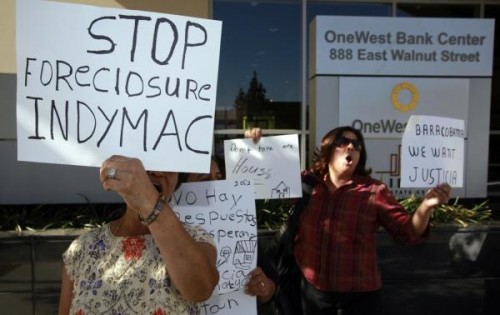 Written by Craig D. Robins, Esq.
One of the biggest stories in years about foreclosure defense litigation on Long Island was the subject of my post on Tuesday:  Judge Cancels Mortgage Due to Mortgagee’s Shocking Behavior in Long Island Foreclosure Action [1].
The next day, Newsday reporter Alfonso A. Castillo interviewed me about the story and wrote a great article that appeared in Sunday’s Newsday, containing several quotes from me.
Here is the Newsday article, taken from the Sunday November 29, 2009 edition:
Foreclosure Ruling Sends Message to Lenders
A Suffolk judge’s decision to wipe out the mortgage debt of a foreclosed-upon East Patchogue couple may send a message to predatory subprime lenders that unless they work to save their customers’ homes, they stand to lose everything, some real estate attorneys said.

“This case shows the change in the tide as to the sentiment about mortgage foreclosures in general,” said Woodbury bankruptcy attorney Craig Robins, who called Suffolk County Court Judge Jeffrey Spinner’s decision “a good demonstration that courts are not going to tolerate this type of conduct by the mortgage companies anymore.”
The judge’s ruling against the lender – IndyMac Mortgage Services, based in Pasadena, Calif . – was without doubt highly unusual. In addition, it was perhaps without precedent. A search of published reports nationally turned up no similar action, and several attorneys said the decision was the first of its kind, at least on Long Island.
But some wondered whether the precedent set is a positive one and others questioned the legal soundness of the ruling.
“It’s encouraging as a citizen, but as a practitioner, I can only think that if the judges have the authority to throw out mortgages, who’s going to be lending money?” Commack real estate attorney Lita Smith-Mines said.
In a statement, OneWest Bank E.S.B., IndyMac’s parent company, has said the bank will appeal. A spokeswoman for OneWest Bank did not return a call last week for comment.
Behind the Ruling
In his Nov. 19 decision, Spinner wrote that IndyMac Mortgage Services exhibited conduct that was “harsh, repugnant, shocking and repulsive” in its proceedings against Diana Yano-Horoski, owner of the Oakland Street home at issue.
Spinner wrote that IndyMac “soundly rebuffed” even the most reasonable of settlement offers, inflated the amount of debt of Yano-Horoski and her husband, Gregory Horoski, and seemed determined to kick them out of their home. In order to deter IndyMac from such “unconscionable” behavior in the future, Spinner erased the Horoskis’ nearly $300,000 debt – in effect turning over the home to the family free and clear.
In the nine-page decision, the judge found IndyMac’s credibility wanting and invoked the court’s “equity jurisdiction,” citing an 1890 Court of Appeals decision and numerous other cases in concluding that the mortgage company’s actions were so egregious that it had no claim, morally or ethically, to “equitable relief” in the matter.
“Thus, where a party acts in a manner that is offensive to good conscience and justice, he will be completely without recourse in a court of equity, regardless of what his legal rights may be,” Spinner wrote.
IndyMac, at its height, was known as a subprime lender that doled out high-cost loans to borrowers with less-than-perfect credit. According to Federal Reserve data, IndyMac approved the fourth-highest number of home mortgage loans out of 440 lenders, with 3,893 in 2007. They were fourth-highest in 2006 as well, with 5,058 mortgages.
Out of more than 500 lenders, IndyMac Bank brought the seventh-highest number of foreclosure actions on Long Island, with 970 between January 2008 and June 2009.
Special Circumstances
Robins said such improper and irresponsible practices were not isolated to IndyMac. But, while Spinner’s decision could create important case law that will likely be cited by homeowners’ attorneys in future foreclosure proceedings, Robins said he did not think it should “open the floodgates” for similar decisions.
“I do see a lot of the irresponsible practices that mortgage lenders commit frequently, but I think what sets this case apart was that there were several irresponsible practices in this one case,” said Robins, adding that Spinner “used this case to send a loud warning to all mortgage companies . . . that they better shape up and get their act together.”
Anthony Sabino, a law professor at St. John’s University who practices bankruptcy law in Mineola , said Spinner’s decision to wipe out a homeowner’s debt to a bank may seem like a victory for the underdog, but it could send a dangerous message.
“If all of a sudden banks couldn’t rely on being paid back their mortgages – you think it’s tough to get a mortgage now?” said Sabino, adding that a multitude of similar decisions could slow down construction and put people out of work and out of their homes.
Spinner’s ruling resembled – but went further than – so-called “cram-down” legislation that passed the House of Representatives in March but was defeated in the Senate. The legislation would have allowed homeowners in foreclosure to ask a bankruptcy judge to reduce their mortgage payment if their lender had not offered better terms.
Sabino said he doubted decisions similar to Spinner’s would follow, because while lenders may routinely engage in “nasty” practices, they would not usually rise to the level of that admonished in the Horoskis’ case.
“The laws of banking and real estate have been around since men and women lived in caves. A bank lends you money, you buy a house, and you have to pay the bank back the money, or it takes the house away. That’s not going to change,” said Sabino, who added that the ruling may not set a precedent at all if OneWest Bank is successful in its planned appeal.
Attorneys said judges usually deal with unscrupulous lenders by dismissing their cases or, in extreme instances, issuing monetary sanctions paid to the court.
However, Hauppauge attorney Arshad Majid, who has represented several homeowners in foreclosure proceedings, said, while they rarely use it, judges have the power in some instances to void mortgages. He was not surprised to hear that Spinner would take the drastic step.
“It’s not only a court of law that he presides over, but it is also a court of equity,” Majid said of Spinner. “The court, in making this decision, wanted to stop a pattern of abuse.”
Be Sociable, Share!