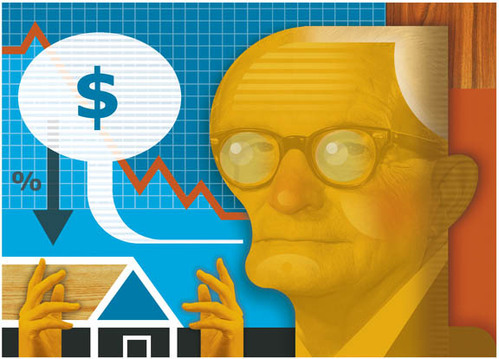 Written by Craig D. Robins, Esq.
Senior citizens can be prone to debt problems
With fixed incomes and unexpected expenses, senior citizens are at high risk for getting into debt – and they have less time to pick up the pieces.
In my Long Island bankruptcy practice, we are seeing more and more seniors utilizing bankruptcy to deal with their debts.
A recent Newsday [1] cover story focused on the problems affecting many of Long Island’s senior citizens which are driving them into debt.  A common situation occurs when one spouse dies, eliminating one-half of the golden couple’s income.  Often receiving limited funds from Social Security or modest pensions, a surviving spouse is driven to using credit cards just to pay for day-to-day living expenses.
Bankruptcy can be a lifesaver for the elderly
The Newsday article told the story of an unfortunate 77-year-old woman who needed to place her sick husband in a nursing home.  But fortunately for her, she was able to eliminate all of her debts by filing bankruptcy.
According to Harvard professor Elizabeth Warren, who I’ve quoted frequently in the past, older Americans are under increasing financial pressure and are carrying more debt into retirement than ever before in history, which leaves them financially weakened.
Today’s economy is bad enough for younger folks, but it can be particularly troubling for those in their 50’s or older who have less time to recuperate and more at stake.
Accordingly to Long Island economist Irwin Kellner, some seniors started getting into debt when they used their homes as a piggy bank and an ATM.  This encouraged people to spend far more than they earned, and they didn’t save enough in the process.
I previously wrote several posts about how more and more seniors are seeking bankruptcy relief – Senior Citizens Are Filing Bankruptcy In Record Numbers [2].
Many seniors have no choice but to rely on their credit cards to pay for the increasing costs of health care.  A serious illness can drive one into debt in the many tens of thousands of dollars.
Unfortunately, one of the difficulties many seniors face is embarrassment from debt.  Consequently, senior citizens are sometimes reluctant to get advice for dealing with their debt situation.
Many seniors are able to discharge all of their credit card debt and medical bills with a bankruptcy filing, and most seniors with significant debt qualify for Chapter 7 bankruptcy.
My office offers free consultations to senior citizens with overwhelming debt problems.
Here are some other resources for seniors on Long Island who are struggling with debt problems:
Legal Aid Society of Suffolk County, Senior Citizen Division
(631) 854-0401
Legal Aid Society of Nassau County
(516) 560-6400
Nassau Suffolk Law Services – Suffolk
Pro Bono Project
(631) 232-2400
Nassau Suffolk Law Services – Nassau
Volunteers Lawyers Project
(516) 292-8299
Suffolk County Department of Aging
(631) 853-8200
Be Sociable, Share!