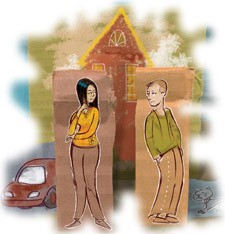 The Bankruptcy Abuse Prevention and Consumer Protection Act of 2005 (BAPCPA), which went into effect on October 17, 2005, provided innocent spouses with much greater rights against debtor-spouses, usually husbands, who previously sought bankruptcy relief as a means to thwart matrimonial obligations. Whether you represent clients with bankruptcy matters or matrimonial matters, you will certainly come across cases involving these issues sooner or later.

The Basic Premise Still Exists: Maintenance and Support Are Not Dischargeable. The Bankruptcy Code excepts from discharge, maintenance or support payments owed to a spouse, former spouse or child of the debtor, in connection with a separation agreement, divorce decree, court order, administrative determination, or property settlement. See section 523(a)(5).

Equitable Distribution is Now Non-Dischargeable. First some history. Prior to October 1994, when the Bankruptcy Code received a major overhaul, it was easy for attorneys to advise clients: Maintenance and support were dischargeable; equitable distribution was not. However, the 1994 Bankruptcy Amendment Act changed that with the introduction of a new provision, section 523(a)(15), which made equitable distribution “potentially” non-dischargeable. From 1994 through 2005, aggrieved spouses had to bring an adversary proceeding to make equitable distribution non-dischargeable. To do so, the aggrieved spouse had to prove a two-prong test: a) the debtor had the ability to pay the debt; and b) the detrimental consequences to the aggrieved spouse outweighed the benefits to the debtor spouse in discharging the debt. In addition, the aggrieved spouse, under the old laws, had to act very quickly to file the adversary proceeding complaint within weeks of the filing of the bankruptcy. The urgency to file under the old laws resulted in a potential trap for many unwary matrimonial attorneys who were not aware of this requirement. However, all of that is now history. Property settlements are now non-dischargeable pursuant to Bankruptcy Code section 523(a)(15).

New BAPCPA Term: Domestic Support Obligations. Under BAPCPA, the rights of innocent spouses are rigorously expanded. Congress has done away with the prior distinction between a nondischargeable support obligation and a dischargeable property settlement obligation. In doing so, BAPCPA creates a new term, “Domestic Support Obligation,” which is defined in Bankruptcy Code section 101(14A). This contains a rather wide definition covering almost any possible matrimonial obligation.

Other Automatic Stay Exceptions for Domestic Situations. There are a number of new provisions designed to protect innocent spouses and the like who were previously stymied from seeking support from spouses who filed for bankruptcy relief. New automatic stay provisions under Code section 362 basically indicate that the stay does not apply to certain designated domestic proceedings which do not have an impact on bankruptcy. Thus, proceedings involving child custody, visitation rights, domestic violence and divorce (to the extent that the divorce proceeding does not seek to divide property of the estate) are not stayed. In addition, now the stay does not apply to any proceeding seeking to enforce payment, or withhold payment, of a domestic support obligation.

Debtors Cannot Avoid Matrimonial Liens. Generally, debtors have the right to avoid any lien that impairs the homestead exemption. However, a new provision in Code section 522 (f)(1)(A) now prohibits a debtor for avoiding a judicial lien for a domestic support obligation.

BAPCPA Increases Priority of Domestic Support Obligations. Matrimonial debts are now at the top of the list of claims that take priority when there are funds to distribute to creditors. In first position is support payable to a spouse or child and in second position is support assigned to a governmental entity. (Code section 507(a)(1)(A)).

Innocent Spouses Can Now Pursue Exempt Assets. A new provision in Code section 522(c)(1) enables an innocent spouse to pursue the debtor’s otherwise exempt assets to satisfy domestic support obligations, notwithstanding any provision of applicable bankruptcy law to the contrary.

Payments of Matrimonial Debts Are No Longer Preferences. Previously, if a debtor paid a matrimonial debt to a former spouse, the trustee, under certain circumstances, had the right to set that payment aside as a preference. However, under BAPCPA, Code section 547(c)(7) was amended to indicate that payments made to a former spouse for a domestic support obligation are not avoidable and therefore, not recoverable by the trustee as a preferential payment to a creditor.

About the Author.  Long Island Bankruptcy Attorney Craig D. Robins, Esq., [1]is a regular columnist for the Suffolk Lawyer [2], the official publication of the Suffolk County Bar Association [3]in New York. This article appeared in the May 2006 issue of the Suffolk Lawyer. Mr. Robins is a bankruptcy lawyer who has represented thousands of consumer and business clients during the past twenty years. He has offices in Medford, Commack, Woodbury and Valley Stream. (516) 496-0800. For information about filing bankruptcy on Long Island [4], please visit his Bankruptcy web site: http://www.BankruptcyCanHelp.com [4].