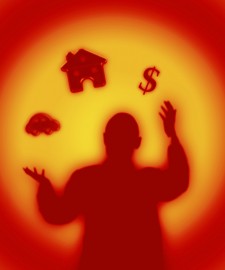 [1]Written by Craig D. Robins, Esq.
Most clients who we represent do indeed pass the means test in Chapter 7 bankruptcy cases.  I would say that at least seven out of eight people who desire to file for Chapter 7 bankruptcy on Long Island are eligible to do so because they pass the means test.
The means test is a formula and bunch of calculations designed to ascertain whether someone has too much income to be eligible to file for Chapter 7 bankruptcy.  The Means Test is Often the Key to a Successful Chapter 7 Bankruptcy Case [2].
So What Are Your Options If You Do Not Pass the Means Test, and You Hope to File for Chapter 7 Bankruptcy?
Fortunately, there are several possibilities, and disposing of debt through a bankruptcy proceeding usually remains an option in one form or another.
Waiting to Become Eligible for the Bankruptcy Means Test Later
Sometimes, someone does not pass the means test because they received a large amount of money in the prior six-month means test period.  The means test requires that you include all income that you received in the six full-calendar month period prior to filing.  (You don’t include income that you received in the month that you file).
The most common example of a large amount of non-recurring income is a tax refund.  Suppose you received the tax refund in May.  Then you must count the tax refund in the means test calculation as long if you file your petition between June and November of that year.  If you have to include the tax refund, it will have the effect of artificially boosting your income for that period.
However, if you just wait until December or later, then you will not have to include the tax refund as part of the six-month income for the means test calculation.
There are other reasons why waiting to file bankruptcy can help.  Some people previously earned a larger amount of income several months ago, but no longer have the ability to earn at the same level for various reasons.
It might be that they were laid off (or their spouse was laid off); or they can no longer earn overtime; or their income will be reduced for other reasons like a new job that doesn’t pay as much.
In such instances, waiting a few months can mean the difference between passing the bankruptcy means test or not.
Engaging in Financial Transactions That May Make You Eligible Under the Bankruptcy Means Test
An experienced bankruptcy attorney is also familiar with all of the intricacies of the means test, and can often recommend other possible ways that may enable a consumer to become eligible.
For example, there is currently an issue as to whether an attorney can recommend to a client that he or she incur debt in contemplation of filing for bankruptcy (This issue is actually before the United States Supreme Court right now).
In any event, if a debtor obtains a new car loan or lease just before filing, the amount of the new monthly car payment can be included as a means test deduction, and this can possibly make the difference between passing the means test or not.
This is just one of several financial transactions that one can do that may make have the effect of qualifying you for Chapter 7 bankruptcy filing under the means test.  A good bankruptcy attorney may also suggest other possibilities.
Filing Chapter 13 Bankruptcy Instead of Chapter 7 Bankruptcy
Most people who do not qualify for a Chapter 7 bankruptcy filing because they did not pass the means test can still file for Chapter 13.
If they do, they still get immediate debt relief through the same automatic bankruptcy stay that stops all creditor action in Chapter 7 cases.  However, they will have to pay something to their creditors, usually over a five-year period of time.  This is done by making monthly payments to a Chapter 13 trustee.
The good news, though, is that frequently, the amount paid back is a small fraction of the amount owed — sometimes as little as ten percent.
When No Bankruptcy Offers a Feasible Solution, Debt Settlement Can Be the Answer
Very few of our clients who desire to file bankruptcy do not qualify for one chapter or another.  However, there is always an option for those who can’t file bankruptcy or do not want to file.  That is debt settlement.
Debt settlement, which is not to be confused with debt consolidation, is when we negotiate settlements with the credit card companies (or their collection attorneys), often for less than 50%, and frequently for as little as 25%.
Doing so, however, requires the ability to fund lump-sum settlements, as the best credit card settlements are only available when the settlement amount is paid in full.
No One Ever Said that the Means Test in Bankruptcy Was Fair
To the contrary, the means test was the most controversial aspect of bankruptcy reform when the laws were changed about four years ago.
The means test tends to actually reward those with significant secured debt by making it easier to qualify for Chapter 7 filing.  Thus, if you have a high mortgage and several car loans or car leases, it is easier to pass the means test and be eligible to file for Chapter 7 bankruptcy.
An Experienced Long Island Bankruptcy Attorney Can Evaluate Your Means Test Eligibility
The means test is rather complex and complicated.  Retaining an experience bankruptcy attorney is your best way to ascertain whether you qualify for Chapter 7 bankruptcy filing, and if not, to learn what your other options are.
To see a bunch of other posts that I’ve written about the means test, please click :  Information about the bankruptcy means test [3].
Be Sociable, Share!