[1]Written by Craig D. Robins, Esq.
HAMP is quite the conundrum.  It offers to save a homeowner’s home by enabling homeowners to modify the mortgage and make the monthly payments more affordable; yet it appears to be quite a failure in terms living up to expectations as to what the program is supposed to do.
I am currently in Puerto Rico attending a symposium of the National Association of Consumer Bankruptcy Attorneys.  I participated in a program today which addressed various HAMP issues as they relate to Chapter 13 bankruptcy.  The program began with HAMP bashing.
This is something I’ve written about extensively over the past several months in posts such as: Problems Continue with HAMP and Federal Mortgage Programs — Is HAMP Dying?  [2] and WARNING: HAMP Can Drive Homeowners Into Bankruptcy [3]
The workshop certainly confirmed the negative opinions that I previously formed about the HAMP program.
For one, “it’s more complex than the federal debt,” said Henry Hildebrand, III, Esq., one of the speakers who happens to be a Chapter 13 bankruptcy trustee from Tennessee.
Problems with HAMP
HAMP, which is the acronym for the Homes Affordable Mortgage Program, was supposed to be one of President Obama’s solutions to the mortgage meltdown our country experienced during the time he ran for office.  Unfortunately, the HAMP program is plagued by numerous problems.  Here are some of them:
Lenders Have Minimal Incentive to Cooperate.  HAMP is not a law.  It is a contractual deal that the U.S. Treasury Department has made with mortgage servicers and their investors to voluntary modify a mortgage for a homeowner.
If the mortgage is modified in a certain way, the lender gets paid a fee by the government.  This fee is in essence the carrot supposedly dangled in front of the mortgagee to get them to participate.  However, the fees are relatively minimal.
Homeowners Can’t Enforce HAMP.  The problem here is that this “contract” does not directly involve the homeowner.  It is a contract between the mortgage servicer and the federal government.  As such, the homeowner has relatively few legal rights to enforce the provisions of the statute.
In other words, if the mortgage servicer does not convert the trial period into a permanent modification, can the homeowner enforce the servicer to do so?  Perhaps this can be pursued under a breach of contract legal theory, but there does not seem to be much case law right now on this.
No One Can Enforce HAMP.  The dilemma continues:  who is supposed to enforce HAMP provisions?  The difficulty here is that HAMP is a contract and not a law – there is no regulatory control.
In response to this concern, the government at least recently set up an enforcement mechanism by threatening to take away $100 or $300 per case.  Big deal.
Setting Up a HAMP Application Takes an Eternity.  A major problem is how long it takes for the mortgage servicer to set up the HAMP trial period.
Who hasn’t been on hold for over an hour with a servicer?   Who hasn’t had documents lost or misplaced by the servicer?  Who has had incredible difficulty communicating with the servicer?  These are all common problems that seem to cause extensive delays before the trial period can commence.

Hamp Forms Are Sub-Standard.  Norma Hammes, another speaker and a former NACBA president, complained that the forms for calculating the homeowner’s expenses are so deficient that she had to create her own forms.
The HAMP Application Website is Sub-Standard.  Ms. Hammes also voiced frustration about the application framework.  “It’s really a nightmare” she said about the HAMP website portal for submitting information.
Program Will End Relatively Soon.  At this time, the HAMP probram is slated to end in 2012.
HAMP Does Not Stop the Foreclosure Process.  I think this is just incredible.  Many clients have come to me for bankruptcy assistance, complaining that they applied for HAMP relief, yet, at the same time, the mortgage lender continued a foreclosure proceeding.
Said Ms. Hammes, “I’ve never seen my clients so discouraged about the legal system and lose faith on the rule of law.  This is all because of their experience with the HAMP program. They know they’ve submitted everything.  It appears the government does not care.  They are devastated.”
The HAMP Trial Plan Can Go On and On.  The so-called three-month trial plan is never three months.  The lenders cannot get their acts together enough to do what they need to do within three months.  The trial periods are frequently longer, even though they are supposed to be just three months.
HAMP is a Gamble.  It is a almost like a lottery.  If you are lucky, you win the HAMP gamble and save your home.  HAMP  really does work for some people, but not for most.  However, this gamble contains big risks — read on.
Most People in HAMP Eventually Default.  The sad fact is that most people who go into the HAMP modification trial program default with their monthly obligations.
The HAMP Paperwork Is Written In Code.  This may be a minor issue, but you have to learn code to fill out a HAMP application.  That is because the HAMP paperwork is replete with acronyms.  BN is the Borrower Notice.  EB is hte Eligible Borrower.  FA is the Foreclosure Attorney.  FD is the Foreclosure Deadline.  FPED is the Forbearance Plan Effective Date.  FPN is the Forbearance Plan Notice.
There are a dozen additional acronyms!!!  Henry Hildebrand commented (only half-jokingly) that he thought this was intentional to scare away homowners.
And For the Biggest Problem with HAMP. . . . . .
Most Homeowners Are Worse-Off After Applying Than Before.  For those who apply for HAMP relief, mortgage arrears build up.  That means that for those who are not approved ( and these homeowners constitute the vast majority of people who apply), they will owe substantial amounts upon receiving their denials.
The mortgage payments are contractual obligations.  Thus, if the homeowner pays a reduced monthly mortgage payment during the trial period, and the homeowner is not approved, then the homeowner will owe the original contractual amount — which is substantially more than the amount they paid during the trial period.
In addition, the homeowner’s credit is destroyed.  The homeowner’s FICO score is destroyed.  The homeowner is much worse off now than before!
In essence, the mortgage lender is saying, “Sorry you don’t qualify after you applied to us — and PS – now you owe us all of the missed payments.  We are going to foreclose on your home.”
So is that enough problems with HAMP?
More Info About HAMP
Here are some other posts that I’ve written about the HAMP process.
Bankruptcy Issues Involving HAMP (Home Affordable Modification Program) — Part One [4]
Seeking HAMP (Homes Affordable Mortgage Program) in Bankruptcy — Eight Things to Know [5] 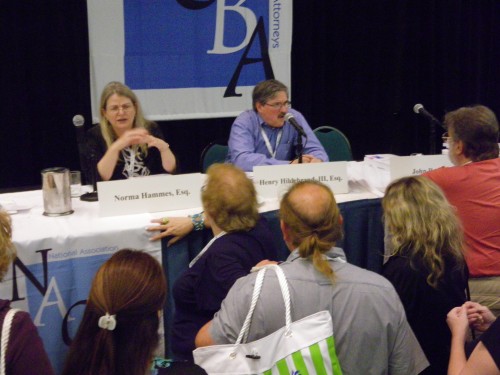