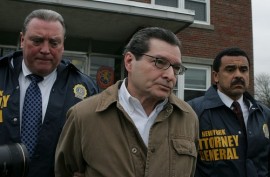 [1]Written by Craig D. Robins, Esq.
Owner of Long Island Process Serving Company Admits Ripping Off Consumers
Last April I posted an article about a Long Island process serving company that had been charged with engaging in “sewer service.”  Long Island Process Serving Company Owner Arrested Today for “Sewer Service” [2].
Last week the owner of that company, William Singler, pleaded guilty to fraud in Nassau County Supreme Court.  He admitted that his company failed to properly served thousands of consumers on Long Island and across New York with collection law suits, and then lied about it with false affidavits of service.
As a result of his actions, many thousands of New York consumers were denied their due process rights, and only learned that they had been sued when their bank accounts were restrained or their wages garnished.
William Singler was the owner of the legal service process serving company, American Legal Process, that had been located on Long Island, in Lynbrook, New York.
Process Server Claimed He Traveled Over 20,000 Miles an Hour!
The New York State Attorney General, Andrew Cuomo, revealed various aspects of the fraudulent scheme which included documents saying that one process server personally served lawsuit papers to someone in Brooklyn at 8:19 a.m. one morning, only to serve a second lawsuit 400 miles away, just one minute later.
That would require traveling over 20,000 miles an hour, and New York highways currently don’t accommodate such speeds.
According to prosecutors, American Legal Process employees routinely made only a cursory attempt to locate debtors, then gave up and submitted false affidavits of service, claiming they had served the debtors with the lawsuit documents.
You can click here to read a copy of the actual complaint alleging fraud against New York process service company [3] .
Pending New York Lawsuit Seeks to Dismiss 100,000 Credit Card Collection Lawsuit Judgments
Attorney General Cuomo is still proceeding with a civil suit to dismiss about 100,000 lawsuits that contain affidavits of service prepared by William Singer’s company, American Legal Process.

Jail Time Expected for Process Server Who Admitted to Scheming to Defraud Consumers
William Singler is expected to face some jail time for his fraudulent and illegal conduct.  He pleaded guilty to a single count of a Class E felony of scheming to defraud, which is punishable by a year in jail.  He is expected to sentenced on March 24, 2010.
In my opinion, a sentence of only a year in jail is hardly just punishment for someone who has defrauded a hundred thousand consumers, many of whom faced great difficulty when they were surprised by frozen bank accounts and garnished wages.
When Singler appeared before Nassau County Supreme Court Justice Alan L. Honorof, he admitted that he had signed phony affidavits of service, swearing that court papers had been served on defendants in debt collection suits even though he knew many of his employees had broken the law.
Many New York Consumers Have Grounds for Contesting Credit Card Judgments and Law Suits
Even though many thousands of credit card collection lawsuits were started improperly, the fact remains that in most cases, the underlying debt is not disputed.  Nevertheless, many consumers who were improperly served now have extra leverage to negotiate a low settlement.
Our debt settlement practice has assisted many consumers with resolving such outstanding credit card debts for very beneficial amounts.  We have also helped other consumers totally eliminate their credit card bills with bankruptcy.
Be Sociable, Share!