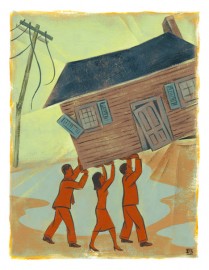 [1]Written by Craig D. Robins, Esq.
The Rosicki Law Firm is another foreclosure law factory and becoming quite a giant here in New York
Rosicki, Rosicki and Associates is another “Foreclosure Factory” on Long Island that brings foreclosure law suits against many thousands of homeowners each year.
I recently wrote about New York’s largest foreclosure law firm, Steven J. Baum, P.C. that brought an incredible 12,000 foreclosure lawsuits last year.  I will now talk about the firm that is number two:  Rosicki, Rosicki and Associates.  They are located in Plainview, which is fairly close to my Woodbury bankruptcy law office.
I know them fairly well, having dealt with them regularly in the course of my consumer bankruptcy practice and also in various matters where my firm engages in foreclosure defense.  I also regularly see their attorneys in court and at continuing legal education seminars.
I don’t have the actual filing figures for the Rosicki Law Firm, but they claim to be the leading mortgage banking law firm in New York.  They also claim to be the largest single law firm in New York State in the combined areas of foreclosure, bankruptcy, evictions, closings and outsourcing.
Is Rosicki, Rosicki and Associates a Reputable Foreclosure Law Firm?
A major part of my detailed review of the Steven J. Baum law firm [2] was the fact that there were a multitude of complaints against them and that this law firm did not seem to enjoy the best reputation.
However, my opinion of the Rosicki Law Firm is much different.  Although from my perspective — which is to protect consumers and homeowners — they are considered the “evil bad guys,” because they bring foreclosure proceedings — the fact remains that someone has to do the job of representing mortgagees in foreclosure suits, and I think they do a fairly respectable job of that.
Many other foreclosure firms seem shrouded in a cloud of negative publicity, and there are a great many foreclosure firms that have been sanctioned for engaging in frivolous or improper litigation.  However, there appears to be a dearth of negative information and cases about the Rosicki firm.  For that reason, and based on my personal dealings on my firm’s cases with their firm’s attorneys, I can only conclude that they are a respectable and reputable foreclosure law office.
My Biggest Victory Against a Mortgagee for Frivolous Litigation Was Against a Mortgagee Represented by the Rosicki Firm
Several years ago the Rosicki Firm represented a mortgagee, Bayview Financial, whose prior counsel filed a grossly improper motion for relief from the stay in a Chapter 13 Bankruptcy case in which I represented the debtor.
That motion for relief indicated that the debtor had failed to pay his real estate taxes, which was not true.  After I brought a counter-motion for sanctions, Rosicki immediately withdrew the motion for relief.  Thereafter I negotiated a settlement in which Rosicki’s client, Bayview Financial, paid an award to my client worth in excess of $30,000.  I reported this situation at length in my post:  Litigating Against Abusive Mortgagees. Your Columnist Scores Big Win Against Mortgagee Who Filed Frivolous Motion [3].
I should note that the Rosicki firm was not the firm that filed the frivolous motion, but that they took over representing the mortgagee after prior counsel filed it.  I litigated this case for a number of months with several attorneys in the Rosicki firm and found all of them to be very courteous, civil and professional
Rosicki Firm Gets Into Trouble Over Wells Fargo Mortgage Foreclosure Brought Without Standing
In 2008, the Rosicki firm brought a typical mortgage foreclosure action against a Brooklyn homeowner who had a Wells Fargo mortgage (Wells Fargo Bank, N.A. v. John Reyes).
In that case, Kings County Supreme Court Judge Arthur M. Schack conducted his own search of New York City real estate records (ACRIS) and discovered that Wells Fargo never owned the mortgage.
Here’s the law:  If a mortgagee does not officially own the mortgage, then they do not have standing to bring a foreclosure proceeding.  Lack of standing is a major mortgage foreclosure defense that I frequently use in my Long Island foreclosure defense practice [4].  For more info see:  Mortgage Companies Entitlement to Bring Foreclosure Proceedings: Prove It or Lose It [5].
Consequently, Judge Schack, in what can be considered a blistering opinion, denied the foreclosure and even set a hearing as to why Rosicki attorney Mary McLoughlin shouldn’t be sanctioned for filing a frivolous foreclosure case. 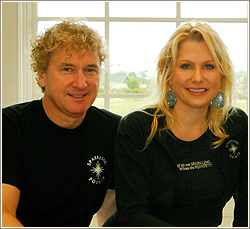 [6]History of Rosicki, Rosicki & Associates
The Rosicki firm is driven by the husband and wife team of Cynthia Rosicki and Thomas Rosicki who, to me, do not seem to be your typical foreclosure lawyers.  They are a very ambitious “power house” couple extremely involved in public service.  They are also vintners who own a Long Island winery.
What is unusual about the Rosickis is their zealous dedication to be so active in community-based public service and participate in many community organizations, fund-raisers and not-for-profit organizations.  They seem to regularly win service awards and be honored for their humanitarian efforts.
The Rosickis met at a debutante ball in 1987.  Tom proposed to Cynthia just two months later.
At the time, Cynthia had a small Brooklyn practice and Tom was not even an attorney.  That led him to enroll in Yeshiva University’s Benjamin Cardozo School of Law, although he subsequently transferred to Touro University School of Law.
The firm initially emphasized mortgagee representation and apparently grew and grew to point where the firm now has about 500 employees.
The Rosickis make it a policy to employ those with handicaps and disabilities and approximately 10 percent of their law firm employees are disabled.
The Rosicki Firm has Five Partners
In addition to Cynthia and Tom Rosicki, there is Kelly Ann Poole, Cynthia Nierer and Craig Wolfson.
Rosicki Law Firm Contact Information
The firm’s main office is at 51 East Bethpage Road, Plainview, NY  11803.  Phone (516) 741-2585.  They also have additional offices in Fishkill and Batavia New York.
Some Interesting Info About the People Who Are Suing You:  Bio of Tom Rosicki
Tom is a graduate of Chaminade High School, here in Mineola; Duke University, where he majored in management science and accounting; and Touro Law School.  Right after college, Tom owned a fast-food Chick-Fil-A store in Cherry Hill, New Jersey.
Then, from 1982 to 1989, he became an FBI special agent concentrating in their organized crime division.  Mayor Koch noticed his investigation of corruption at the South Street Seaport and then offered him a job as Deputy Commissioner of the New York City Taxi and Limosine Commission.
From there he took a position as vice president director of security for Macy’s where he was in charge of security for 59 stores as well as the Thanksgiving Day Parade.
Tom has been president of the Board of the Association for the Help of Retarded Children for a number of years.  He is also involved in a number of other community-minded charitable organizations.
The Other Half:  Cynthia Rosicki
Cynthia attended Adelphi University, graduating in 1982 with a degree in drama and political science (maiden name — Cythia Senko).  There she acted as a theatre manager in the Calderon Theatre and acted in performances as well.
Cynthia Rosicki then went on to New York Law School, graduating in 1986.
In the late 1980s, Cynthis Rosicki got her start with mortgage law working for a mortgage foreclosure firm.  She then went out on her own, opening a small law office in Williamsburg, Brooklyn, in the front office of her parent’s funeral home.
Cynthia is on the Board of Directors of the Kosciuszko Foundation and the Association for the Help of Retarded Children (AHRC).  She is also active in the organization’s “Gift of Life” and “Help the Homeless.”
The Rosickis reside in Nassau County in Muttontown.
Political Affiliation
One can wonder if they are Republican or Democrat.  Cynthia was previously named New York State Businesswoman of the Year by the National Republican Congressional Committee.  Tom was hired by the very Democratic Mayor Koch.
I previously wrote a column about how creditors and mortgagees tend to be pro-Republican, and those in favor of bankruptcy and consumer rights tend to be Democrat:  Being Haunted by the Vampire Bankruptcy Bill: It’s Just Politics [7].
Are You Getting Drunk by the People Who Are Trying to Foreclose Your Home?
The Rosickis have done very well financially, enabling them to purchase an 12 acre summer home and vineyard in Southold, Long Island.  With a vineyard in the backyard, they founded Sparkling Pointe Winery in 2003.  They have since tripled its size.
What kind of wine do these foreclosing attorneys make?  Champagne, of course.  Technically, Champagne is the sparkling wine made in the Champagne region of France.  In New York and elsewhere it is called sparkling wine.
The wine actually won a top honors award.  Their 2000 Brut Seduction received top prize in its category at the world-class 2009 San Francisco Chronicle Wine Competition.
One can only wonder if Tom and Cynthia break open a bottle of the bubbly and toast each successful foreclosure.  Perhaps they should send a bottle of bubbly to the poor, foreclosed-upon homeowner as a consolation.
What Can You Do If You Are In Foreclosure?
In assisting clients with Long Island mortgage foreclosure defense, we routinely come across situations where the paperwork submitted by the foreclosing bank is not in order.
However homeowners have rights afforded by the law.  A bank cannot foreclose unless they do it the right way and all of their papers were prepared properly.  If they are not, then the homeowner has a meritorious defense to the foreclosure action.
Even if the bank eventually corrects the problems, a homeowner can usually add many additional months or years to the time that they can stay in their home.  It therefore pays to meet with an experienced Long Island foreclosure defense attorney [8].
Dozens of Articles About Foreclosure Defense Are On This Blog
I have written many, many articles and posts about foreclosure defense on my blog.
Just click here Information About Foreclosure Defense [9]  to see them.  For example, Many New York Foreclosure Suits Are Dismissed Because They Are Defective [10].
Be Sociable, Share!