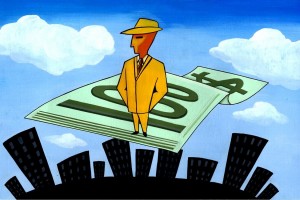 Partner-level attorneys representing Tribune Co. with their recent Chapter 11 bankruptcy filing are charging as much as $1,100 per hour. Tribune Co., a Chicago-based newspaper publisher, is the former owner of Newsday.

Lawyers at Sidley Austin, one of the nation’s largest and most prominent law firms with 1,800 lawyers, are asking as much as $1,100 an hour for bankruptcy work on Tribune Co., surpassing the rates previously charged by another national law firm heavyweight, Weil, Gotshal & Manges, in the Lehman Brothers Holdings Inc. Bankruptcy case, one of the largest in history.

Some commentators have stated that this appears to be the highest hourly rate ever heard of for a bankruptcy lawyer.

As far as the pre-petition retainer, Tribune paid Sidley $4.5 million about two weeks before the filing.

The hourly rates far surpass the rates charged by Long Island bankruptcy lawyers where most attorneys charge hourly fees that are less than the highest hourly fee charged by a Sidley paralegal.