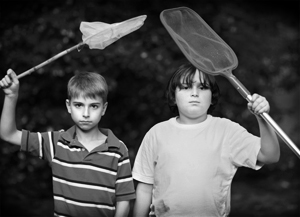 Written by Craig D. Robins, Esq.
What happens when you take two spirited six-year-old boys who love to use their imagination and pretend to be Power Rangers, and it also happens that both of their fathers are bankruptcy attorneys?
Why, you get Super Ninja Bankruptcy Attorneys!
My son went through a faze where he couldn’t get enough of the “Power Rangers” television program.  He would often pretend to be a Power Ranger, which is a seemingly ordinary individual who morphs into a powerful, costumed superhero.
Add to the mix visiting Daddy’s bankruptcy law office, seeing Daddy come home “costumed” in his suit and toting his briefcase, and hearing Daddy talk a lot about this thing called, “bankruptcy.”
So about three years ago, my son, Max, while playing with his best friend, Sam, came up with the idea that they were Super Ninja Bankruptcy Attorneys.  Sam is the son of former Brooklyn Chapter 13 trustee Stuart Gelberg [1], who now is a Long Island bankruptcy attorney, like me.
I was never able to get Max or Sam to reveal exactly what the Super Ninja Bankruptcy Attorney does, as they explained to me that this was “top secret.”  However, I see them constantly trying to save the world. Or at least that’s what it looks like from where I sit.
The boys, now nine, are still hard at work, playing Super Ninja Bankruptcy Attorney.
Be Sociable, Share!