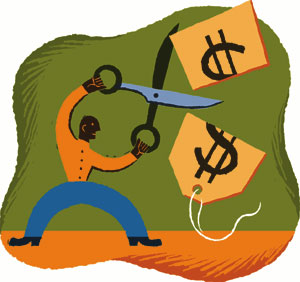 When you have debt problems, sometimes filing bankruptcy is the best solution.  But sometimes it isn’t.  When bankruptcy isn’t a perfect fit, debt negotiation may be.  This involves negotiating settlements with the creditors who are typically credit card companies and banks.

As the sheer number of people defaulting on their credit cards continues to increase, rising to unprecedented levels, credit card companies are doing something that they have historically scorned: settling credit card accounts for substantially less than what is owed.

With unemployment topping 9 percent and more, this approach by credit card companies has increased drastically. Credit card companies have even gone so far as to authorize front-line employees with the power to cut good deals.  We’ve been noticing this in our debt negotiation practice as we’ve been achieving some incredibly good settlements lately.

According to the Federal Reserve, 6.5% of credit card debt was at least 30 days past due in the first quarter – the highest percentage since the Fed began tracking the number in 1991.

What does this all mean for the average consumer who owes tons of money on their credit cards?  Well, it means that now may be a very good time — perhaps the BEST time — to settle their debts with the credit card companies.

When considering debt negotiation, we believe that it is very important to retain an experienced debt negotiation attorney – one who is experienced enough to negotiate the best possible settlement.  There are many debt settlement companies out there who are not acting in the best interests of the consumer.  On several occasions I’ve written posts about this debt settlement companies engaging in false and deceptive practices (for example, please see Debt Settlement Industry Criticized by New York Times [1]).

As experienced Long Island bankruptcy attorneys dealing with credit card companies on a daily basis, we know that creditors would rather have a piece of something now than absolutely nothing down the road.

This is exactly why now may be the best time to consider your options, such as scheduling a free consultation with an experienced bankruptcy and debt negotiation attorney to discuss your best options for forging a new, debt-free future.