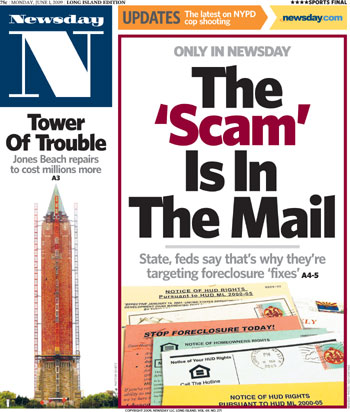 Your blog author quoted in Newsday article about problems with loan modification companies
Newsday [1] ran an in-depth cover story in today’s newspaper addressing the problems with the Long Island loan modification industry and highlighting the Federal Trade Commission’s recent nationwide crackdown on “fraud and deception” by mortgage modification companies.
Randi F. Marshall, an investigative staff reporter at Newsday, wrote the extensive article, which will continue in tomorrow’s edition.  Ms. Marshall brought attention to the fact some attorneys, like myself, refuse to do loan modification work.
“No matter what’s going on in the economy, you’re going to have these companies come out of the woodwork and take advantage of people in a vulnerable situation,” I was quoted as saying.
The fact is that most lenders are not cooperative in negotiating modifications.  Yet, this has not stopped numerous people and companies, essentially those who previously sold sub-prime mortgages, to now scam those homeowners who are desperate for a solution and are susceptible to fraud.
.
Newsday commented that many consumers paid exorbitant fees to loan modification companies on Long Island, only to find that the companies disappeared with their funds without doing any work at all.
Be Sociable, Share!