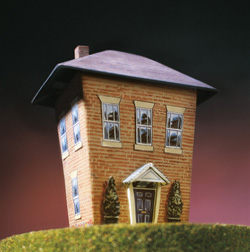 On August 30, 2005, just weeks before the Bankruptcy Code was radically overhauled by the Bankruptcy Amendment Act, the New York Legislature, with absolutely no advance warning, boosted the homestead exemption from $10,000 to $50,000 per person.

This was a boon to debtors as it enabled a typical husband and wife filing for bankruptcy relief to protect $100,000 worth of equity in their home. However, It was the bane of judgment creditors, many of whom stood to lose the total value of their judgment liens.

The Homestead Amendment Causes Judgment Creditors to Develop Novel Defenses. Last year I brought a typical motion to void a judgment lien, relying on the $50,000 per person homestead exemption created by the 2005 change to the New York Exemption statute. The judgment was about five years old and predated the exemption change.

I was surprised when the creditor sought to object to the motion, claiming that the debtor should only be entitled to use the old $10,000 exemption, rather than the newer $50,000 exemption. (If this was the permitted result, then the judgment would not have impaired the homestead exemption and the lien would have remained.)

The creditor argued an interesting theory that it had a vested property right which could not be altered by the amendment to the law. Fortunately for my client, the Court decided for the debtor and didn’t even address this novel defense because the creditor’s motion reply papers were improperly submitted.

The Judge recognized that the increased homestead exemption retroactively applied to debts incurred prior to the 2005 change in the exemption statute. However, the Judge believed that there was still a valid issue to be resolved concerning whether the lien is a “vested property right” that cannot constitutionally be taken away by the August 30, 2005 amendment without addressing concerns under the “takings clause” of the Constitution.

The Judge discussed the concept of retroactivity and commented that “although retroactive statutes are not specifically prohibited by either the Federal or the New York State Constitution, a retroactive statute may nevertheless be held to violate constitutional provisions of general applicability, such as the proscription of legislation impairing vested rights without due process, or the obligation of contracts.”

The Judge continued with his discussion by suggesting that it was not necessary for him to even address such elusive concepts of when “rights” and “interests” become vested because New York’s highest Court addressed the question of when a “judgment lien” upon real estate becomes vested, citing a case from 1872.

Accordingly, the Court held that the fact that the judgment lien was filed before the enactment of the increase in homestead exemption from $10,000 to $50,000 does not affect the Debtor’s right to claim the $50,000 exemption in order to accomplish the avoidance of the judgment lien. Victory for the debtor.

About the Author.  Long Island Bankruptcy Attorney Craig D. Robins, Esq., [1]is a regular columnist for the Suffolk Lawyer [2], the official publication of the Suffolk County Bar Association [3]in New York. This article appeared in the February 2008 issue of the Suffolk Lawyer. Mr. Robins is a bankruptcy lawyer who has represented thousands of consumer and business clients during the past twenty years. He has offices in Medford, Commack, Woodbury and Valley Stream. (516) 496-0800. For information about filing bankruptcy on Long Island [4], please visit his Bankruptcy web site: http://www.BankruptcyCanHelp.com [4].